t-minus 18 days until i was supposed to be due (march 8). i’ve certainly been thinking about it a lot, especially since one of my coworkers is due just a couple weeks later and so is showing her big 8 month belly and is having a bunch of baby showers, etc. we at work are throwing her a shower next week and, since she’s not going to find out the sex of the baby before it’s born, afterwards we’re going to start collecting proper sex baby outfits and stringing them across the office.

i think i might avoid the shower, but i can’t avoid the count down to my own “due date” in my head.

sigh. at least i have the half marathon march 7th to look forward to as a well-calculated distraction.

and with the training for the half, i’ve been running roughly 15-20mls per week and i’ve also been doing the wackadoo diet i described earlier…so i’ve lost a bit of weight and my pants are fitting better. i feel good when i look good, but it’s bitter sweet that my belly is tinier and tighter now when it’s supposed to be big and huge right now instead.

i drew a picture to illustrate this…though it didn’t really turn out all that well. 🙂 the fit version of me on the left is supposed to be thin with big muscles (those aren’t pointy boobs!) and a smile and the prego me on the right is supposed to have huge fat swollen feet and hands and a sour look on its face….but the prego version turned out looking more like a monster that just ate a child instead of an expectant mother. ah well. you get the point. 🙂 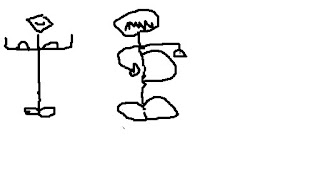 Adoption is Hard Infertility and Impatience Pregnancy is Hard

Infertility and Impatience Pregnancy and Infant Loss Pregnancy is Hard

Bummer Remix (Again). Only Read if You’re Up For It