Only Some of The Bump is The Baby, The Rest is Somoas 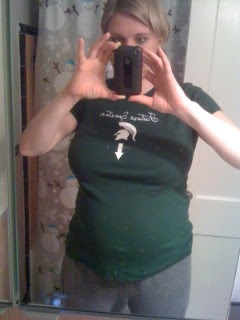 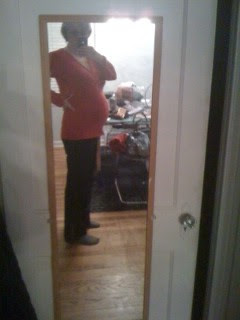 ignoring the blurry pic off my phone and the clutter behind me, can you kinda see my big ‘ol bump?

it’s been really fun this week feeling the fish flopping around in there. makes me pause and smile every time. the movements are big enough that my hand on my belly will bounce.

i go to the OB on tuesday. in addition to weighing in, i also have to do a glucose tolerance test where you drink a sugary potion and see how your blood glucose level holds up an hour later, testing to see if we’re looking at gestational diabetes.

i think i’ll be fine, despite the fact that i’ve eaten roughly a pound of esther price candy this week (ohio based chocolate company- robb brought them back for valentine’s day when he was there visiting) and round about 6 boxes of girl scout cookies.

sigh. those bastard girl scouts know what they’re doing. i think i paid for at least 3 of them to go backpacking in the himalayas from the profits of my cookie purchases this year.

and thin mints are not that thin when you make a pile of 5 of them and jam them into your craw. i’m just sayin’.