i smiled during my whole OB visit yesterday. i never really thought i’d make it far enough to need a glucose tolerance test. 25 weeks! that’s a big deal. feels like a major milestone. it’s almost, kinda, sorta a real kid in there. 🙂 heart beat was a little hard to find on doppler, but that was only because baby was doing cartwheels after the sugary drink i consumed (tasted like melted orange flavored Fla-Vor-Ice…remember those?) and wouldn’t hold still long enough to get a reading- finally did, but took some chasing around my abdomen. we laughed since i could feel movement and we could hear the movement- like baby olympics in my pelvis. again, he found everything “perfect and normal.”

EXCEPT that i failed my freaking test. which isn’t really a big deal. it just means that now i have to do a 3 hr version of it where i drink the gunk, and get my blood tested hourly for 3 hrs, making sure my blood glucose level is adequately down by the end of the 3 hours. not a problem. will do it next week at the local hospital where i’ll be delivering. will watch movies on my laptop and just relax.

BUT today i felt like a big fat slob all day. if i’d been eating better, more active would this not have happened? if i had the fit, tiny pregnancy of some of my peers, would i have been alright? i keep getting reassured by very healthy people that a non-fasting initial 1 hour test is often high, but does not mean you won’t pass the 3 hr test or that we’re actually looking at a diagnosis of gestational diabetes. let’s hope that’s true. 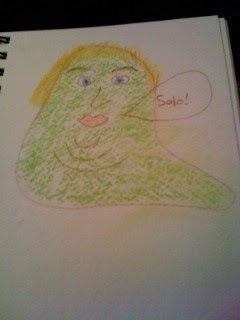