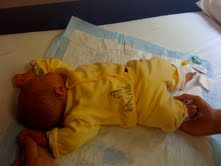 how are things going so far you ask?

well…mostly awesome. he’s incredible. i’m a total junkie for his cheeks, his feet, his gaze. irresistible. i have that freshly fallen in love feeling all the time. even his screams are precious.

but those screams are also abundant. last night i was up on and off for feeding and changing him until about 2am and then just up after that. he’s having none of being laid down to sleep, only wants to be cuddled.

and nursing is going only ok-ish. he didn’t latch well and wasn’t taking much leche (despite nursing and pumping) and consequently wasn’t pooping much and so now, consequently, is jaundiced.

and he just hasn’t been all that interested in nursing, so i was forcing it, and one boob was totally dead to him (despite the fact that my fun bags are now full of milk and even funner (read- crazy huge) than before, they haven’t been all that cooperative). pumping hurts and is annoying…the list goes on.

so we saw the pediatrician this morning for the first post-discharge visit and she was worried about his bilirubin, so she sent us to the hospital lab for a draw. i had my first new mom temper tantrum on the way there and sobbed the whole way. i felt like a failure that i hadn’t fed him adequately and i dreaded feeding him twice as often to make sure we could fix this problem. and i was totally sleep deprived.

after the heel poke lab draw, i heard back from the pediatrician that his bilirubin was quite high and he was borderline needing to be re-admitted for phototherapy. she decided we could try to increase feedings at home, put him in sunlight and digitally stimulate his poor cornhole and check back tomorrow to see if the number is down. 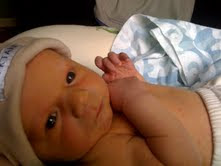 and it’s been a success, as far as i can tell. lots more poos and wet diapers and feeding more often has made feeding easier. he has been able to use both tats the last few times and is also taking pumped milk by the bottle periodically. he curled up in the sunlight like a cat.

so we’ll find out in the morning how we’ve done and if he needs to get admitted overnight.