well. let me start by saying that today has been a good day. no complaints. went to picnic lunch with henry and robb then shopping at the mall. small war hero has been sleeping since and i’m getting stuff done around the house. and he is back to nursing like a pro.

but YESTERDAY was a disaster. this whole infant thing definitely comes with good days and bad days. it’s a matter of staying away from the ledge on the bad days. sheesh.

actually, the last 2 days were pretty rough. as you might know, i have ventured into the world of breast feeding. it is rewarding in that you know the bebe is getting awesome nutrients and you can entirely control what he consumes, plus there are no supplies and it is ready always…but it is NOT instinctive nor easy for either of us. we’ve had to work hard to make it sort of sometimes mostly work. i keep blaming my freakishly large boobs (seriously? ratio of boob to henry’s head? 3:1. easy), but in truth it’s logistics, it’s supply and demand, it’s the fact that i nurse every 2.5-3hrs and sometimes it takes up to 45 mins to nurse, so my downtime between feedings is nil.

all that aside, we’ve done ok.

until 2 days ago when tiny wee one suddenly could not latch on my boobalas and so i turned to pumping and found, to my dismay, that not much was coming out. certainly not enough to satiate him from a bottle. so i stared into his red screaming, jowly little face and feared i would not be able to feed him enough to give him what he needs. (again, there are jowls of proof that he’s been getting ample enough food, but still it was retching my heart out).

so wed night in a near panic i sent robb out to buy formula. WHICH IS NOT THE END OF THE WORLD. but, my gosh, you’d think based on my reaction to it that by not being able to nurse him i had failed my baby in the highest order and that he was now sentenced to sucking on fart flavored sawdust.

but again, mandy and jason, our wonderful friends, came through for us with all the backup supplies we need.

which was life-saving. yesterday i continued to attempt to nurse and pump my own weak amount and get more and more frustrated. but because of their provisions at least henry could eat.

but if you had been a fly on the wall in my house yesterday, you would have seen a tiny sobbing infant and a large sobbing woman both rocking (and one of them swearing) surrounded by lots of piles of dirty dishes and laundry. all soaked in tears of unfathomable sadness.

by the time robb got home, we were both worn out and i was nearly catatonic i was so distraught. the guilt that i felt for not being able to provide for him was overwhelming. i felt like a failure and totally helpless. and the more worked up i got, the more out of sorts he got. so he wouldn’t sleep and wouldn’t be still and happy so i couldn’t put him down. so i couldn’t pump. so he couldn’t get my milk…so i got more worked up, etc, etc. it was unpleasant.

i feel like the little boy, elliot, in “ET.” remember how when ET was dying, elliot got sick, too? they shared wellness and illness and emotions. that’s how i feel with henry. when things are off in his small world, things are also amiss in mine. and conversely, when he’s content, i can breathe easy.

we are already codependent. well on our way to “who are you taking to homecoming, henry?” (said in millhouse voice) “the COOLEST girl i know- my mom!”

so i spoke to the lactation consultants at the hospital and they suggested i pump often to increase my supply. and to keep trying to nurse, but not be afraid to supplement with a bottle. they said that sometimes healthy infants will just stop latching and it usually only lasts a day or two.

so after hearing that and after talking it out with robb, having a healthy dinner with above named wonderful friends, bitching to my mom on the phone, and watching ‘holy grail’ for family movie night, i feel a lot better. i will ATTEMPT to let things roll off my back and not be so dire about it all.

and today is much better with my new can-do attitude.

there is a guilt that comes with this parenting thing that i feel acutely now and then. and maybe especially so for those of us who had to fight hard to get ’em here in the first place. yesterday when i was genuinely miserable i kept thinking ‘who am i to complain about one second of this (should be) joy? we prayed, begged, and fought for this and now i’m an ingrate’.

but i think having a newborn is hard. it just is. it doesn’t diminish my adoration of him or thanks to God for him. it’s just how it works.

and give the people what they really want: 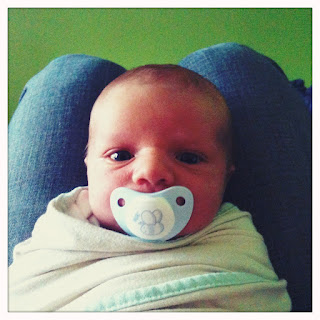