Haven’t Had the Breast of Weeks, But it Hasn’t Been Brawful Either (Har, Har, Har)

well, it’s been a busy couple of days. i am blogging at 6am because i have a few minutes to myself as niñito is asleep and also there’s an excellent thunderstorm going on outside that i don’t want to miss. (ok, such is life…i started the post at 6am, it’s now 8:47 and quiet again around here, so maybe i’ll actually complete my thoughts now…we’ll see. and now it’s 10:22. submit! submit!).

we had a couple of rough nights in a row early this week where he just never really settled and wanted to nurse all the time. some of it might be a growth spurt, some might be the change we made- he is no longer sleeping in our room in the pack-n-play, but is now in the crib in the nursery. and he’s also been increasingly full of gas and unhappy about it and was spitting up a lot and coming off the boob shrieking and such.

so in addition to keeping him upright and doing other little tricks, i called my pediatrician and she started him on zantac for reflux. the instructions were to give him 1 ml 3 x/day 15 minutes before meals. which is a bit of a challenge since we don’t really have set meal times just yet and we know it’s time for him to eat because he’s screaming bloody murder that he wants to eat, like, YESTERDAY. so we’re lucky if we get 10 minutes of distracting him by dancing around the house and showing him shiny things before i give in and feed him. nonetheless, the zantac seems to be helping some.

but i am still not a very secure nursing mom (perhaps this is because nursing makes him cry like i’ve punted him?) and i have all these concerns about my milk production and his latching and what it will be like nursing when i’m back to work, etc, etc. so i start doing research on-line and inevitably always find la leche league’s website. so i went to check out a meeting.

i was very concerned that it would be a bunch of crazy militant hippies nursing their 5th graders and that i wouldn’t fit in at all. it wasn’t like that. they all seemed fairly normal. and their kids were more like 1-3 years old. some were also nursing infants (tandem nursing). they actually had really practical advice and were totally reassuring about a lot of things. they really discouraged me from trying to diet and working out too hard as i need all my resources to feed henry. and they swore up and down that just by continuing to nurse, the lbs will just fall away over the next few months. that is the kind of advice i like to hear. pass the pie.

so the group isn’t as homogenous as i feared, but it does take a certain type of person with a passion for the mission who is willing to put her nipple into the mouth of a toddler with a full set of teeth. i did get some wide eyes in response to me telling them i had henry on (gasp) medication for reflux. and i did feel pressure to establish my hippie chops. as i changed his disposable diaper i rushed to tell them BUT WE USUALLY USE CLOTH AT HOME THESE EVIL THINGS ARE JUST FOR GOING OUT…and i casually dropped my vegetarianism/ veganism into conversation.

and i refrained to mention anything about us following the Baby Wise program (controversial sleep and feedings scheduling to get baby on a routine and start to sleep through the night early, restricts baby from nursing sometimes, encourages you to not co-sleep, lay them down when still awake, etc) or what i do for a living.

and speaking of that, i guess that’s the biggest difference between me and these women. they meet at 10am on a tuesday. so after next month, i’m back to work and no longer able to participate. they’re all home with their kids.

if i’m being cynical and paranoid, i read from this good mom= breastfeeds like a champ + doesn’t work

it’s the same thing with other parenting groups i’ve found. our church’s mommy support group, the hospital’s parenting support groups- anything designed for women meets in the mornings. there are occasional family ones for the involved dad that meet in the evening, but they’re few and far between.

not that i’m much of a joiner anyway, but i found it worth noting. we also just met with a financial planner (evidently adult people are supposed to save money for the future??) and he kept asking if we planned for me to stay home one day after we have 3 or 4 more kids. not kidding. that’s what he said. 🙂

and the thing is? i just don’t. (…plan to have 3 or 4 more kids OR plan to stay home). i mean, obviously things can change, and i KNOW it’s going to be hard to go back to work after i’ve had 24-hr/day with him all summer…but i worked hard for my degree, have worked hard in my career. and being a PA is an important part of my identity. and i think daycare, while it poses some negatives, also offers great benefits to kids.

so i feel good about my life decisions. i just can’t talk about nipple shields on a tuesday morning. 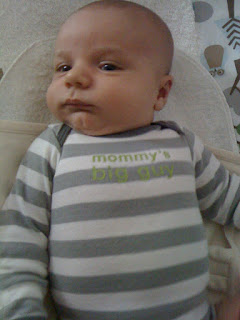 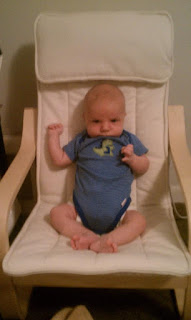 chunky little friend is really filling out. we keep having the discussion about “how many chins does one baby need? shouldn’t we be donating some to chin-less babies in africa or something?” and that chair he’s “sitting” in…it goes with the adult versions from ikea. we bought it ages ago. before he was even a little seedling i think. he’s not quite ready for it, auntie erica couldn’t help herself. 🙂 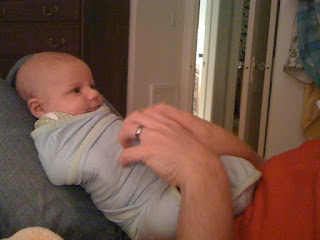 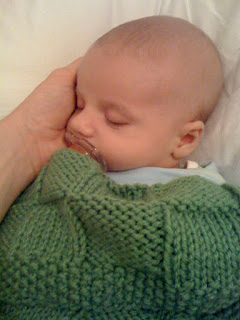 we spend hours trying to make him laugh…and sleep. both are joyful.