so i’ve been having lots of aches and pains. as a patient once said to me, “i am achified.” mostly my knees, but also ankles, back, hips…the NP at my ob/gyn’s office said it’s probably post-partum related, still from extra relaxin in my system. but it really hurts! i thought i’d somehow damaged ligaments in my right knee it was such a harsh and pin-point pain, but i did some yoga yesterday and it’s much improved today, so i think it’s just a matter of stretching the surrounding muscles and strengthening.

so i hope to/ plan to/ want to do a bunch of yoga. i have good intentions. we’ll see. scheduling robb and i both to work out after he gets home from work while still finding time to have some family time and make/eat dinner, etc. tricky. we’re working on it. 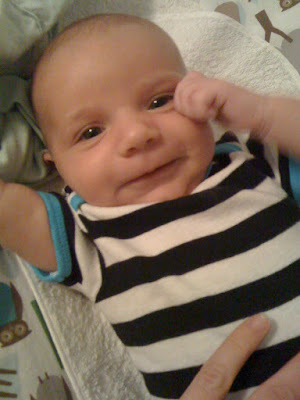 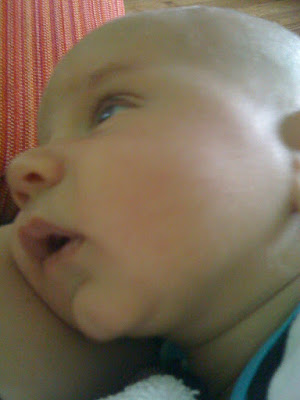 sir cheeks-a-lot is doing great. i think we’ve got his schedule down pretty well. we’re having a lot fewer screaming fits (i’m not just saying that like parents tend to do, “did WE go potty? are WE hungry?”…i mean both of us are having fewer screaming/crying fits. and the one who was swearing so much a few weeks ago? well, she’s stopped that, too). 🙂 and he spends more and more time awake and happy. i’m sure some of that is just that he’s older/more mature. and he’s sleeping fairly well.

however, he was up every 2 hrs last night. i try to feed him really frequently from about 6p-11p every evening and then with a full tummy he can make it 5 or so hours after that. one time even 7 hours! but last night we blew it (“we” meaning robb and me, not him so much) and he went long stretches in the evening without eating and i think that’s what caused his up-ness all night. we’ll see. 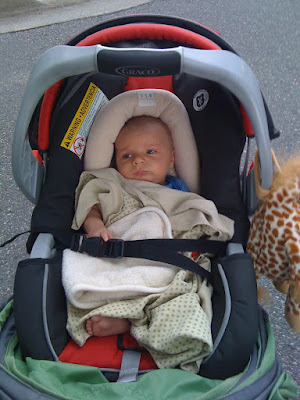 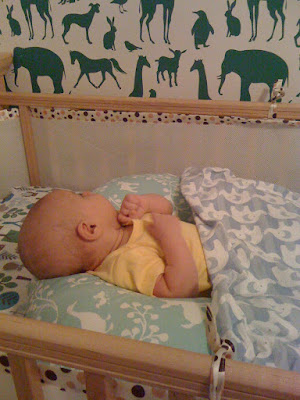 the one place he still cries a lot…his car seat. and i guess we picked the right wallpaper, huh?

i’m going to do a quick yoga video now before his last feeding.