Sleep!! Must Have the Precious. He Stole it From Us. Sneaky Little Hobbit.

every night this week, tiny dancer has slept through the night! it’s wonderful and we’re all in good spirits because of it.

we’re only a week in to this success and i know things can change any time, but in case it’s not a fluke and we’re actually doing something right (unlikely), i’m about to describe our sleep/eat schedule to interested parties. this will be very tedious for anyone without a newborn, so i will include some knock knock jokes throughout to entertain everyone else.

ok, so we’ve been sorta kinda following the”baby wise” plan, which promises your baby will be sleeping through the night between 9 and 12 weeks. (this plan is controversial and fairly anti-attachment parenting. we fall in the middle of those two models somewhere, i think). this sleeping through the night thing is muy importante to me as i go back to work in a few weeks, 40+ hrs/week, 7am daily with some overnight call and always with sharp instruments ( i work in surgery). so i need my sleep as much as possible.

according to that plan, we’re feeding him every 2.5-3 hrs during the day, with some flexibility if he’s hungry sooner, but never going longer than 3.5 hrs, even if it means waking him up. (knock knock. who’s there? figs! figs who? figs the doorbells, it’s broken so i had to knock!). also, the never ending newborn cycle should always go eat, wake time, sleep, eat, wake time, sleep, so as not to get him dependent on eating to fall asleep. his day time naps have gotten longer and longer the older he’s gotten.

…then, starting in the evening, we’re doing ‘cluster feedings’ so that he eats a lot and his belly is full like a boa constrictor who ate a goat when he falls asleep. so i feed him at 5pm, 7pm, and 9pm at which point we put his pj’s on and swaddle him, give him his pacifier and put him to bed…or let him fall asleep in our arms- we’re not so good at the putting him in the crib when he’s still awake thing- but that is the goal, so that, again, he doesn’t get dependent on being held to fall asleep and he can put himself to sleep without us having to jump through a bunch of hoops. this will also help him put himself back to sleep when necessary. (knock knock. who’s there? cash. cash who? i didn’t know you were some kind of nut!). then, when i’m going to bed at 11pm, i feed him one more time in his sleep (a “dream feed”) without really rousing him, just to top him off. usually i have to use a bottle for this one since that nipple is harder to ignore than my softer ones, apparently. (note that i also pump at this time while robb is giving him the bottle- because him sleeping through the night mean that the bobbsey twins are also sleeping through the night and so need to get purged before being asked to go that 7 hrs).

and, unless he’s wet/pooped all the way through his diaper, he doesn’t wake up until 5:30am. (knock knock. who’s there? leaf. leaf who? leaf me alone!). if he does wake up in the middle of the night, it’s usually once and at around 3-4 am. i’ll change him and rock him for a few minutes, re-swaddle and pacifier and put him back in the crib and so far, he has been able to fall back to sleep without needing to feed at that time.

so, right now over night he’s sleeping a total of 8-9 hours from 9pm to around 6am with me feeding him briefly but not otherwise waking him/engaging at 11pm and occasionally having to change him one other time during the night, but him returning to sleep right away afterwards. i think that’s pretty darn good!

so there’s that. it’s our plan so far and we’re getting by with it. he’s more cheerful during the day when he sleeps all night, too, it seems. we’ll see how long it sticks… 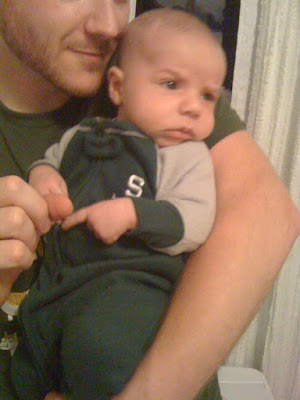 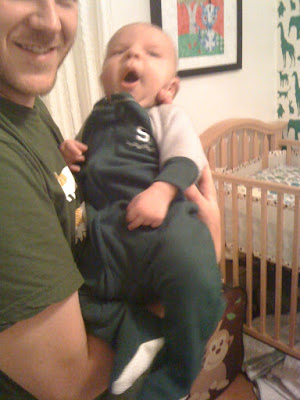