He Might Drool A Lot, But He Can Play Rachmaninoff Concerto #2 on The Kazoo 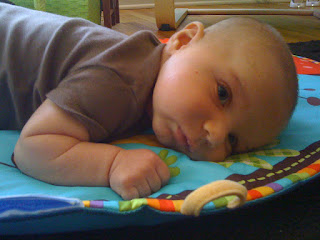 well, tiny heiny has had an amazing week. he’s been so active and fun, engaging and happy. he’s getting easier and easier to take out in public as he tends to just fuss instead of outright scream when something’s amiss in his little world. he even (knock on a forest full of trees) did really well in the car this past weekend when we went on a 4 hr trip north. just looking around contently or sleeping. what a guy.

and he had his 2 month well visit last week. he was a total rock star. was cooing and playing the whole time, hamming it up for the doctor and MA’s and nurses. and he had to get a bunch of vaccines. an oral med plus 2 shots (2 shots!? ay yay yay). they’re combo platters, so all told he received the following vaccines: diptheria, pertussis, tetanus, polio, haemophilus influenzae, and pneumococcal. he took them like a champ. cried for less than a minute, then zonked out.

he slept for hours…but when he did wake up, he was crying pretty pitifully and obviously uncomfortable, so we gave him one small dose of tylenol, and since then he’s back to his old happy self. no fevers or rashes or anything and has been sleeping great through the night and is eating like a bear.

he’s 75th% for both height and weight and 45th for head…which makes me fearful he’ll end up looking like the shrunken head man in beetlejuice, but the pediatrician, wisely, reassured me that it’s normal to have some variance in this and that he will not turn out like shrunken head man. i do have some guilt now that i called him “beeg hehd” for several weeks after his birth. this was because 1) he, like all babies, has a disproportionately large head, 2) we were watching the show “swamp people” in back-to-back episodes and one of the hugest gators was called “Big Head” but said with a cajun accent it’s more like “beeg hehd” and 3) my vagine was all to’ up and it seemed like he must have an exceptionally large head to cause that much lady part mayhem.

anyhoo- all is well. he is growing beautifully and hitting his developmental milestones.

it is funny, though…i swore SWORE i would never feel competitive about him. but as i was going through the questionnaire on what he’s able to do so far, i felt compelled to exaggerate. “does he grasp a rattle in his hand” so i poked the pen i was holding into his clenched fist and answered YES. “does he laugh without being touched or tickled? YES (lies). “does he roll over on one side?” NO, but only because he doesn’t want to… 🙂 i realized only later that the questions applied to babies from 2-4 months, so he’s really not supposed to be doing any of those things yet and it’s probably obvious to the doc that i was lying. balls.

as far as the vaccines go, we are following the cdc recommended pediatric schedule. the first couple years comes with a lot of pokes. and, although i am a huge advocate of vaccinations to protect ourselves and others, i must admit i was nervous about him getting so many at once. most kids do just fine, but some kids do have fevers and local reactions after immunizations. some even have seizures. so all these scary fears were plaguing me. and seeing your wee one in pain that you caused. yuck. and, i must admit, that even though i trust the studies that prove safety and efficacy, once it comes time to actually put these bugs into my own little monster, i had some nerves. there’s this whole faction of people out there who, despite exhaustive scientific studies that prove otherwise, believe vaccines cause autism (fewer who link them to SIDS, too). i think that stubborn belief without proof is rather ridiculous, but when the needle is pointed at my own baby who i would kill to protect from anything bad ever happening…? it did give me pause. but then i remembered that that is exactly why we’re vaccinating him. to protect him from bad things. from dis-figuration and paralysis and illness and even possible death.

so i’m just feeling very blessed all around at how well he is handling everything, how healthy he is, and how far he’s come. i also am enjoying the delightful personality we’re starting to see.

i’m more in love with him every day. 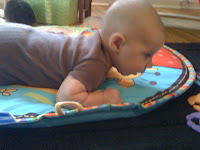 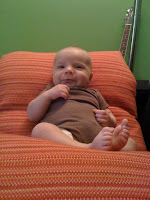 i did not have to lie about these ones. his neck is strong and his smiles are plentiful. 🙂