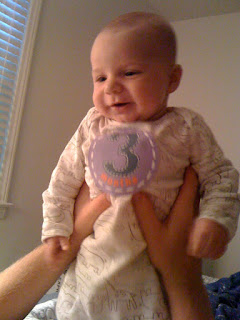 first day at daycare went great! we somehow had actually sent him with everything he needed (i had this nightmare vision of us forgetting something like diapers and them having to use paper towel and duct tape or forgetting milk and them giving him cut up pieces of flank steak or head cheese because it was all they had).

they figured out our hippie cloth diapering thing w/o a problem. they also swaddled him when he needed it and he slept and ate well. tra-la!

and when i got there to pick him up at the end of the day, the main teacher of the infant room said “he’s very serious. we finally got him to smile and laugh a little at the end of the day, but it took a lot of work.” but when i woke him up and he saw me, he was nothing but easy, huge smiles. which made me feel like a million bucks. he actually knows me and evidently even likes me! huzzah! it’s possible that this is the staff’s method of making new parents feel reassured about leaving their spawn for the day. i’m guessing when he says his first word or takes his first step while there, we’ll get a report that says something like “henry is SO close to walking. try working with him tonight…” that’s just good business.

so at 3 months he is happy, healthy and beautiful. and more and more fun every day. he constantly “chatters” with coos and other funny noises and he smiles and laughs fairly easily. he rides better in the car, his sh#t fits are fewer and farther between. he tends to just sort of fuss/whine instead of explode now. and he is drooling and chewing on everything…don’t feel any tooth buds yet, but i think they’re lurking not too far under the surface. 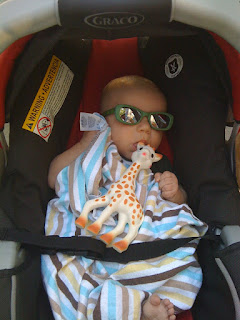 and he’s starting to reach for and play with things. he always has something in one of his little monkey paws and it’s then immediately put in his mouth.

and he sits up stronger and more independently…although left unaided he still tips over on his head (no surprise-those cheeks must be heavy!). but he’s pretty laid-back, so if he tips over onto something good to suck on, no problem.

he hasn’t rolled over yet, but he does sort of scoot himself w/ his legs like a tadpole. especially if he’s been put on his tummy and he’s pissed. he makes annoyed noises and scoots. probably toward the door to escape.

what else? no doctor visit this month, but he’s over 14 lbs now and growing like a weed.

all in all, he is a little pile of heaven and we’re feeling very blessed that he landed with us.