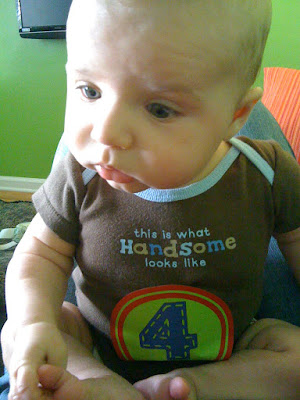 little monkeystein is officially 4 months old and he is doing AWESOME! he is sweet, funny, easy-going and growing and developing just beautifully. he is a very likable chap. robb said the other day that he thinks henry will be “one of those people who everybody likes.” 🙂 so far he is quite charming and likable.

he has his 4 month appt on tuesday. well see then what his official weight, height, etc are. but for now we’ll just report that he seems appropriately chubbly.

he is sitting with assistance and rolls over onto his side occasionally on his own. he is intentionally reaching out to grasp things now but doesn’t have a whole lot of control over it. he smiles and laughs A LOT, and now with merely a silly song or look from us, it no longer requires we do gymnastics and such.

he’s sleeping roughly 8-9 straight hrs/night and still takes a couple good long naps every day. he eats 7-8 times/day and eats great either nursing or from a bottle (about 5-6 ozs at a time). he is in size 3-6 month clothes, so that’s normal and he just moved up to the #2 nipples (this is fascinating, isn’t it? more for my friends with newborns than anyone else who is probably forking themselves in the eye right now out of boredom) and is in regular sized cloth diapers.

things to report/admit: i have dropped him JUST ONCE. and it was only a few inches and into his carseat. but it was directly onto his face. in macy’s. with a lot of witnesses. he doesn’t seem harmed by it. that side of his head was always sort of smooshed, right? 🙂 builds character.

what else…he has started to notice the dog a bit. fistfulls of hair and howls won’t be long now. and his fat thighs and feet are very ticklish. which is good, because you can’t really keep your hands off them.

so that’s what 4 month old hj looks like. life with him gets better every day.