Look What Henry Made Me All By Himself!

so…sadly/happily my sister-nanny will be off to greener pastures soon. she is now officially a licensed RN (!), so i guess, really, her greener pastures will be dealing with adult feces instead of infant feces. a big step up. 🙂

but anyway, we’re all super proud of her and excited for her future. it’s been amahzing having her here with henry and helping around the house and we will miss her. (she was a total steal- a qualified nurse and excellent cook willing to work for just a little bit of money and a lot of slobbery baby kisses? fantastic. ).

but, we’re also really comfortable with the daycare we found and feel good about him going there full time once she has moved on.

(although i must admit, robb has always dropped him off in the morning and i pick him up in the afternoons until last week when i took a day off to get ready for the dedication party and i dropped him off at daycare for a few hours so i could get stuff done. wowza. the leaving part is WAY worse than the picking up part. and it’s not that i think henry is missing me while i’m gone it’s that i am longing for him the whole time. eck.)

so far, from everything we’ve seen, this daycare center goes above and beyond. they are extremely diligent and thorough and do just an incredible job. the level of detail and care they show each baby monster is amazing.

and they are so organized. they have little cubbies and lockers and boxes all labeled with each baby’s name. it’s darling and very efficient. and they do arts and crafts! see below.

i get overwhelmed just trying to manage 1 infant for a few hours a night…they have some 6-10 infants at a time and yet the women are all peacefully tending to them and not crying and drinking in a corner. like i would be/am.

and the babies are hilarious to watch. most of the time they’re being held or are in swings, bouncers, cribs, etc. but sometimes they’re having floor time and when there’s a pile of them on the mats on the floor it’s like something out of the discovery channel. the bigger ones who can scoot or crawl inevitably trample the less mobile ones and they just paw all over each other- a hand ending up smashed in someone’s nose, a knee in someone’s diapered crotch. it’s like watching sea turtles on a rock, scrambling up each other to get to the sun. they seem wholly unaware that they are on another person and not a piece of furniture.

i want to put on a safari hat and crouch and watch, speaking quietly into a microphone with a british accent as i observe these strange creatures in their native habitat.

henry’s locker and his footprints as halloween decor. 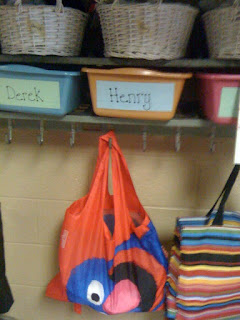 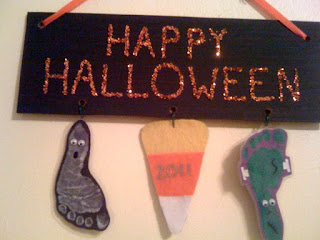