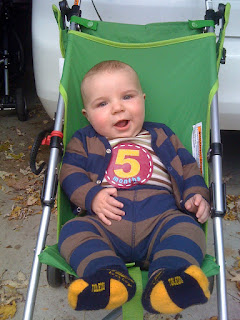 (sorry i tend to dress you like a grandmother, henry. your pants probably don’t need to be THAT high. but all the other babies are wearing cardigans these days, aren’t they? no?)

monkey butt is 5 months old officially. he’s rolling over and throwing himself around like a whirling dervish. he laughs a lot and is still a really happy guy…despite the 2 front teeth that are searing through his gums and the head full of snot.

he’s sleeping meh, since he’s not feeling so hot, but still wakes up all smiles, so whatchagonnadoboutit, right? and he’s eating pretty well through all of this. we’re still just breast feeding, but it’s closing in on the time that we’ll start cereal and veggies and such. (just when you think you have this baby thing down, they go and throw in some developmental milestones and you’re clueless once more!).

this is a (blurry) picture of his 2 front puppy teeth…also this is what it looks like from my perspective when i’m nursing him. terrifying. i risked my life to shoot this quick pic on my cell phone. he’s like one of those belligerent drunk people who try to constantly start fights with you but then just as quickly are sobbing and slobbering all over you saying that they love you. 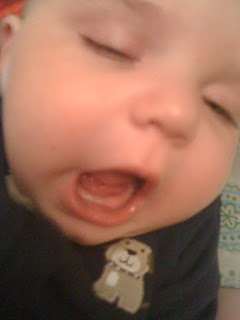