A Very Merry Unbirthday to You (Yes, You)!! 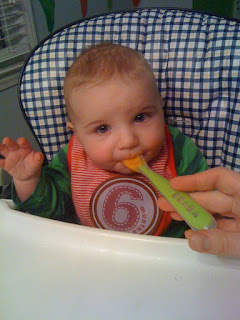 for one thing, he’s HUGE. we’ll know on monday at his 6 month peds visit officially where he stands compared to other babies his age. but i’m thinking he’ll be in a king kong category. the wii scale (we trust it -ish) told me he weighs just under 20 lbs now. for weeks i’ve been packing up his “baby stuff” and putting it upstairs into a giant pile i’m affectionately calling ‘storage.’ he’s outgrown the majority of his clothes stock and is now in 9 mos/12 mos stuff. we had to get rid of his bouncy seat since his ‘bulk’ hit the floor, making it less bounce and more just, you know, seat. and we finally let go of the carrier/stroller/car base system because he was chunking out the front and sides of it and moved onto big kid car seats that take up the majority of our back seats and will hold him until he’s something like 14 years old.

and now that he’s sitting up reliably (w/ caution and much supervision as occasionally he still passionately pitches himself backwards or to the side, making every attempt to concuss himself). we’ve been having him sit in the seat in the front of shopping carts (where he immediately and disgustingly puts his little mouth on all the nasty hand germs of all the nasty people who have shopped their before us. nasty…ah, well. it’ll build immunity. and character.). and he’s sitting in highchairs at restaurants and at home.

and we gave him his first real food! sweet potatoes all blended down and whipped with marshmallows, brown sugar, butter, and pecans…or just with breast milk. he had to use his tiny imagination for the rest of that. he did great! we probably gave him 3 tbs total and i bet he got a good 1/8 tsp down his throat. not bad for his first time out!

he’s still sleeping well, provided he’s on his favorite bed= me. in his crib, not so much. we’re working on the sleep thing. it’s a challenge, but we’re getting there. we find that we’re very clear-headed and decided on it at 2pm when robb and i are chatting on the phone at work, debriefing about the night before and making our attack plan for the night ahead. at 2am?? not so much. the best laid plans…are lying down, with a baby sleeping on their chest(s). 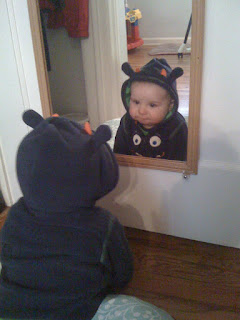 but he’s all around doing awesome.

in addition to sitting up and propping himself up by his fists like a small albino gorilla, he uses both hands for fine motor activities, also. he plays with toys and grabs anything and everything and tries to usher it to his mouth. he still isn’t making any moves toward crawling and doesn’t really roll over much, but he scoots a little. and…have you seen his cheeks? my theory is that they’re just too heavy to haul around too much. so we’ll get there.

he is still with the 2 teeth on the bottom. and he’s forming more word-ish sounds and now he blows raspberries all the time. it’s cute until he’s supposed to be nursing and then he’s a vicious motor-boating baby monster. 🙂

(he will totally thank me some day for these observations. i just know it.)

i’ll post a video of him eating real food soon. both nights we’ve tried it, it’s barely made it out of the fridge and it’s already up his nose. 🙂