so, i’ve discussed this with several of my friends who also have infant humans and they all agree, managing one is like doing a science experiment.

most days, i feel like i have more questions than answers and we’re just sort of throwing stuff out there to see what will stick. when to feed, what to feed, how to encourage sleep, what absolutely NOT to do to encourage sleep, how much time they spend playing on their own versus interacting with you, etc, etc. books help some, but they all offer sure thing(!) different advice.

every day is an exercise in figuring him out. and once we get one system down, he’s sure to change it up. it’s an experiment. and i honestly don’t know if the mouse in the maze will find the cheese faster if i encourage him with techno music or polka, but i really want to find out.

in this case, of course, the mouse is henry and the cheese is SLEEPING THROUGH THE NIGHT and the music variation is all my attempts at getting him to do that. and the maze is my bonkers mind the day after i haven’t slept all night. 🙂

and i realized this week that i think we changed too many variables at once, so we did not have a very well constructed experiment. he pretty much simultaneously started eating solids, came off his zantac, went from 7 to 6 feedings in a day and got some teeth.

everything i read tells me that he should be able to go from bedtime (8pm-ish) to morning (5am-ish) without eating. also, that unless he’s completely buttsploded, he should be able to make it through the night with a wet diaper and it shouldn’t make him nuts enough to wake up.

but try telling him that. last week he was up constantly (10:30, 11, 11:30, 12:00, 2:00, 4:00). even when we folded and brought him in bed with us, he was thrashing around and troubled. i folded again (like origami) and nursed him on and off through the night. so, basically, neither of us slept. and i realized the day after that rough night, while i was bathing in a cup of coffee, that he hadn’t really slept more than 2 hrs straight in at least a month.

no wonder my thoughts are so cloudy and i feel so dumb! it’s not a brain-eating parasite introduced by my neti pot and tap water after all! it’s just plain old lack of sleep.

so this week, i thought, what used to work? what worked when he was tiny? not caring that he should be past a certain stage (come on! mama’s gotta sleep!), what tricks have we been successful with in the past?

so i started dream feeding him again. i put him to bed around 8pm and then before i go to bed, around 10:30 i change him (into a disposable- he seems to do better w/ those than the cloth over night) and feed him in his sleep. i put him back down and go to bed. and he has made it until 3 or 4 every night this week! if he does wake up before then, it just takes a few minutes of rocking to get him back down in his crib.

so now he’s only in our bed after 3 or 4am when i feed him and so robb and i are getting a big chunk of uninterrupted sleep for the first time in ages. and, henry doesn’t seem to believe this, but babies also need sleep. their brains require it for development.

so, i’m not walking into traffic in a stupor and henry’s brain is getting bigger before our very eyes! it’s been a good week.

so, the mouse found the cheese….for now. 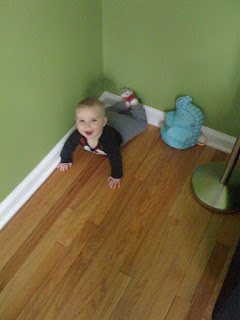 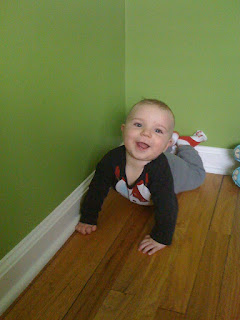 henry is now scooting! backward. only backward. he ends up wedged in a corner spinning his wheels, but it’s progress anyway!