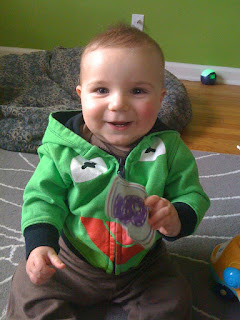 he decided he did not wish to wear the sticker this time, so he’s holding his 8 month sticker in his little paw. this is just before he ate the eight.

…eights months old today! he’s getting through this nasty RSV bug and back mostly to his normal self. we’ll keep him off the rest of the week and then send him back to daycare monday to pick up the next round of crud. (wouldn’t want him to miss any of it). 🙂

when he went in to the peds office last week, he weighed 20 lbs 11 oz. i don’t know if they measured, but i think he’s roughly 5′ tall now. he’s huge. he takes up the whole changing table.

he’s also started getting a will of his own. when you steal something from him, he follows it (object permanence) and he’s pissed! it’s cool to see his personality coming out. he’s already complaining when he feels like his rights are violated. so that’s good.

and he’s been scooting and rolling all over and tonight he actually took a knee or two in a forward direction! he’s rocking on all fours and i think will be full on crawling in a day or two!!

we have a LOT of baby-proofing to do around this house. but i think instead of doing any of that, i have a different idea. remember the movie ‘ET’ where the men in hazmat suits came to examine him and set up a whole tube system of tents going to-fro the house? i might construct something like that running through our house, so that he can’t actually interact with any of the real surfaces in our home, but can exist in a sort of middle-tent zone where he will be injury-free and won’t break anything. you like it? right? RIGHT?

(no, not like bubble boy at all! you’re missing the whole thing….see, there are these tent hallways and they go from room to room…and…no, i’m not paranoid and over protective/bearing. i…i’m not talking to you anymore.)

…and he has teeth! lots of them. 3 on the bottom and 1 1/2 up top. he has the cutest little smile now (see above). he looks more and more like a little boy and less like a baby every day.

well, he looks more and more like a little person and less like a baby. he still often gets called a “she.” i’m not at all offended, he’s a beautiful child. big gorgeous eyes and long eye lashes, etc, etc. plus, we’re not putting him in football and truck clothes. mostly gender-neutral animals and stuff, so there you go. 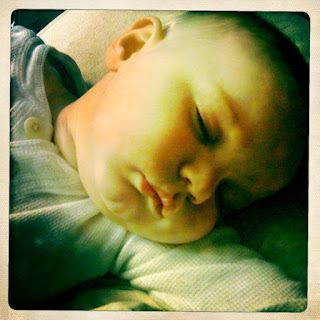 he may be growing longer and leaner, but he still has those epic cheeks.