i got to daycare to pick henry up today and he was hanging out on the floor with a little girl who was born on the exact same day that he was! and, miraculously, he didn’t look like too much of a moose next to her. they were at about the same developmental stage, too. both kind of playing together, touching hands and smiling at one another, sharing snotty kisses, etc. and crawling-ish. it was adorable. they actually seemed to care that the other one existed. maybe sharing a birth date gives them some sort of pseudo wonder twins powers and they’re communicating. hopefully they are not planning a rebellion. i don’t think they yet have the dexterity for that.

in any case, he’s a busy guy these days. cuddling with him is more like him climbing us like a jungle gym.

he’s intrigued by everything and wants to feel it, taste it. more and more like a little boy each day.

still no words. waiting for him to look at us and call us by name. i think it would be awesome if i could get him to call me “mother” instead of “mama.” i would also like to teach him to shake hands instead of give high five.

he’ll be the smarmiest baby on the playground. 🙂 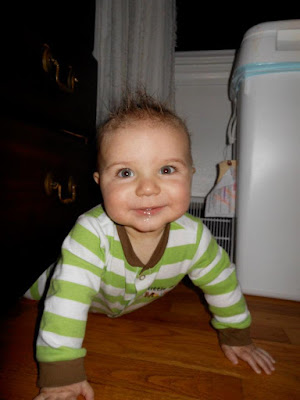 those cheeks just kill me.