inspired by cooked garbanzo beans (chickpeas) i had in the fridge that needed usin’, as well as some tempeh i had on hand…. 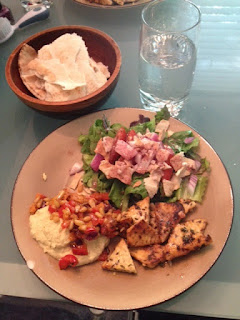 –Salty Hummus. see, the thing about hummus is that you can make a million varieties, with the same process and ingredients. what is hummus? bean dip. what does it contain? cooked chickpeas, olive oil, lemon juice, salt, and tahini (sesame paste). i just sort of throw it all in a food processor until it looks and tastes right. you can blend it until it’s sort of chunky-pasty or until it’s smooth like frosting. up to you. i tend to like a lemony salty version…i wee bit over salted last night, but…eh.

–Red Pepper Apricot Pine Nut Tapenade- this was inspired by the “eat well enjoy life” hummus line. i first sampled them at costco. they are SOOOO good, i wanted to keep changing clothes and putting on fake mustaches so that i could go back through the sample line a thousand times without the lady noticing. anyway- was making my own stuff from scratch last night, so here’s what i did….i sauteed, in olive oil, garlic and onions and red pepper flakes and salt and pepper. i then added diced fresh red peppers and then diced fresh apricots and pine nuts and sauteed it until it was all still a little chewy, but cooked through. i served it on top of the salty hummus.

–Mediterranean Tempeh– i followed this recipe, from the inventive vegetarian, exactly- using fresh thyme i had on hand, and agave nectar, when given the choices. flavor and texture were both pretty good. i sauteed just because i don’t really have a grill right now, but that would have been great, too.

–Fattoush Salad– i just used the veggies i had on hand- romaine lettuce, tomatoes, and red onions and then toasted some pita and crumbled it on top and used this salad dressing recipe from allrecipes.com.

everything was really good, and really healthful. and made for great leftovers for lunch today. but put the dressing on the fattoush within 30 mins of eating it or it’ll be muy soggy.