How We Do Chocolate Mousse, Vegan Style, Yo 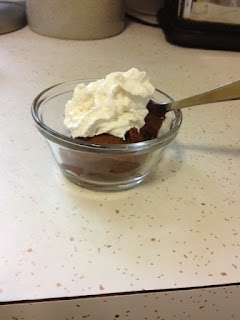 yum. so i got this cookbook called “the complete guide to vegan food substitutions” by steen and newman. it’s pretty good. (uses peanut oil a lot, but can obviously be subbed for allergies).

i was leafing through it the other day and henry went “mmmmmm” and pointed when he saw a picture of BBQ beans. so i made them. and made a whole summer meal around them (with dill capers tater salad, vegan coleslaw, and veggie burgers). needless to say, beans of anticipation turned out delicious but were too spicy for monkey and they were spit out among so many tears of unfathomable sadness. in the same leafing through cookbook episode, we BOTH went “mmmmm” and pointed when we saw a pic of chocolate mousse.

so i made that, too. henry won’t eat it, either. but that’s no judgement on the mousse. it’s more because he’s boycotting food because his face hurts and he’s trying to give me an ulcer paired with a psychotic break.

ABC Mousse Topper page 244 (sweetened w/ fruit and no added refined sugar, other than what’s in the chocolate….this can be used as a cupcake frosting, or chilled, as a mousse. i served it like mousse with some vegan whipped cream on top).

i did not have all those fancy extracts, so i just kept adding more vanilla until it tasted right. i did add a titch of maple extract, because i had some and i was feeling left behind.

1. melt chocolate in microwave/on stove.
2. put milk, nanas, cados, extracts and salt in food processor and blend until smooth
3. add the melted chocolate and process until smooth, scraping sides occasionally (here the recipe recommends only putting in 1/2 the chocolate, so that you can later swirl the remaining in to make threads of melted chocolate that will get crunchy as it cools—i like smooth mousse, so i just dumped it all in).
4. transfer to large bowl or individual serving dishes. chill before serving.
5. again, we just gobbled it up, but by the next day after being chilled over night, i could see how it could be a great frosting for cake. will try at some point.