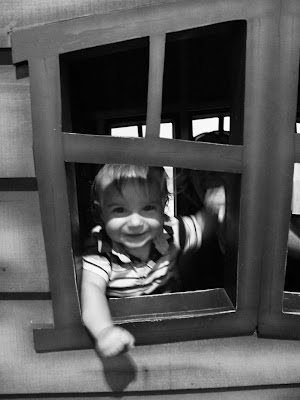 monkey is 14 months old today. he had a rough night last night. robb and i both seem to have a flu right now, and i’m guessing henry has the same, but can’t verbalize his complaints of chills and aches, so just thrashes around and screams unless his (very ill and cranky) parents walked around with him for hours on end. 🙁

but then this morning, he came up and kissed me without being prompted, for the first time. a proper kiss with no teeth and no drool and even a little *smack* noise. adorable.

he is so verbal lately. it’s a riot. he says and signs “more.” he very clearly says “mia,” the dog’s name and has started repeating what you say to him. and his first 2-sylable word is “cracker.” i think it’s a judgement on us more than the name of a food item, but i have no proof. he also does a few animal noises. we bought him a fisher price barn w/ all the animals at a garage sale down the street, so we’ve been learning our animals and their noises.

he’s walking without difficulty now and even running some without falling. he will chase us around the house and play large scale, full contact games of peek-a-boo. he gets all giggly when we’re “coming to get him” but hasn’t yet figured out to run away from us.

he has something like 12 teeth now, although i can never be sure because he is wily and very bite-y. a few are still working their way up.

we’re hoping he’s gaining weight. we’ve been adding full fat coconut milk and seed butter and oils to everything. he’s definitely lengthening. there are parts a-plenty flying all over the place when we try to sit with him in the rocking chair.

and we are totally weaned from nursing. i still have a small frozen supply, so i’ll try to stretch that out so he gets some breast milk for fat & immunity every couple days.

weaning went ok. up until last night, he’s actually sleeping better, i think because there’s nothing good to wake up to so why bother? 🙂 i started the full birth control pill again and i think that’s helped me transition easily from my end. it dried me up and i haven’t had any pain or leaking or issues like that.

and just to prove he’s a big boy for reals, he is scheduled for his first hair cut next week. i will, of course, post pics.