Halloween 2012 and ‘How to Raise a Tiny Psychopath’

henry was ‘the dude’ from “the big lebowski” for halloween this year. we figured this might be our last year of him not having much of an opinion on the subject, so we’d dress him in a way that makes us giggle. (the one on the left is henry, the one on the right is jeff bridges) 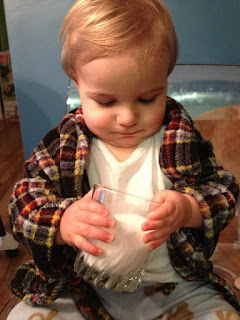 he drank his “caucasian” (hold the vodka, hold the kahlua, coconut milk sub for creamer) and loved answering the door to the trick-or-treaters (“hiiii!”). he also trick-or-treated to exactly 1 house, but kind of had to be dragged away from the leaves he was playing in and up the steps. once he got there, he saw the dog behind the glass door, and we had to drag him back down the steps away from the house. after all that dragging, we just set up shop in our living room to give out candy. CANDY! he gets it and he likes it.

smarties are to henry as cocaine is to, well, anyone, i guess. he looooooved them. he also enjoyed combing through the bowl of candy and hoarding it all for himself. when the poor saps at the door wanted some, he was having none of that.

lately, even when we’re not hyperstimulating him with sugar, he’s been getting really frustrated. he melts down and throws himself to the floor, shakes and clenches his jaw and sometimes hits himself or us when he doesn’t get what he wants, and today at daycare, he bit himself hard enough to leave a mark when another kid had the toy he wanted. i was all ready to write love on his arm and intervene, but the daycare guru lady said it’s typical at this stage. when he can’t yet express what he wants verbally, but he SHORE as hell knows what it is when he’s not getting it, he uses any method he can to release the aggression. they told me to be thankful he’s biting himself instead of others. well, he’s done that, too. but i guess this way we’re not getting any new strands of rabies, right?

hopefully we can help give him some coping skills and language to express his frustration before he gnaws off a foot or something.