Twenty Months and Working It Good

monkey turned 20 months this week and he’s doing great! he’s talking so much. stringing phrases together. occasionally nouns and verbs lining up and marching out more or less as they should. and long words like “flamingo” are just flying about. and he counts to 10. well, to 10 except for 9, which he denies exists. and names the color of all the cars we pass and toys he’s playing with (he usually names about 5 colors, and seems to give himself a win if the object falls in any of those 5 colors) .

and we’ve recently entered a new era where he is naughty…on purpose.

and i think we have to start parenting up. it’s suddenly not enough to just feed and water and change and comfort him. now we have to discipline him, too.

when he was really little, it was convenient for me to believe that he had no idea what he was doing or that it was bad to be violent. but now he’s been around long enough that he needs to start knowing the boundaries of decency and to grow a little empathy for his fellow man. teeth marks in your friends are bad, mmk?

so i’m changing his diaper the other day (woe unto him, every time) and he halls off and smacks me in the face. so i tell him, “no. we do not hit. we use nice hands.” and then insist he says he’s sorry.

i don’t know if him saying he’s sorry (and TOTALLY not meaning it) is actually doing him any good, but i figure it will make his victims (and their parents) feel a little better after he’s beaten them senseless. we also make him say ‘thank you’ and ‘please,’ which he also just parrots and it means little to him but A LOT to the people who are giving him stuff.

but this ‘i’m sorry’ thing i think he actually sort of gets. because he DOES NOT want to say it.

after he smacked me and i insisted he apologize, he went to great lengths to avoid eye contact. then when i held his hands and made him focus on me, he made a silly face and smiled all coyly, trying to get me to smile like, ‘we’re in this together, right, mommy? i mean, you got my hilarious joke, didn’t you? wink wink nudge nudge?’ and THEN to further avoid actually saying he was sorry or having to deal with the situation at all, he says ‘hug, AAAAHHH’ (he’s taken to saying “aaahh” when he does something sweet/cute, since that’s what we always say) and buried his head in my chest. but it didn’t feel like it was in remorse/reconciliation, it felt like it was in a tradesies sort of way. like ‘i will give you some of my cute if you let me out of this stupid apology’ sort of thing.

i’m pleased that i stuck to my guns and eventually he looked at me and got a little sober and said ‘sorry’ or ‘sake’ or something like it.

but i’m worried i might actually have to read some parenting books on behavior modification before he completely perfects the art of manipulation.

it helps not at all that once he did finally look at me during this exchange, it was with his crazy beautiful huge anime doe eyes that just crack my heart open. i almost choked and started laughing several times or swept him up and kissed him until my lips gave up.

he’s so totally gorgeous and precious and adorable, i really would just give him my car if he asked nicely enough. 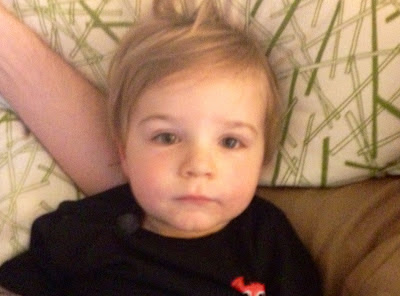