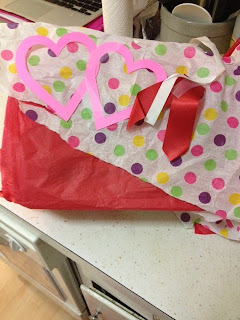 so, robb and i have never really done much for valentine’s day. well, i take that back. when we were dating, one time he bought and filled out a whole box of cheesy valentines cards all to me from “kids in my class” (“Dear Sarah, I Choo-Choo-Choose You! Love, Sally,” etc) but that was, like, 15 years ago, and we haven’t really made any efforts since.

this year, i bought him a movie he’s been wanting for ages (‘Scott Pilgrim vs the World‘) and he bought me (vegan) cupcakes-in-a-jar from our favorite cupcake place. 🙂 nice. but that’s the kind of thing we do on a random tuesday.

so, anyway, that is all to say that we sort of forget it exists. so, on the 13th, we got a note sent home from henry’s school saying not to forget a shoebox for the valentine’s party.

my immediate panicked “failure mom” thoughts went like this: 1) there’s a valentine’s party?! 2) if the kids need a shoebox, it must be to put the valentine’s cards they’re expecting to get from each other, right? 3) we don’t have any valentine’s cards or treats for henry to bring!! 4) worse. parents. evar. 5) should i buy cards? bake cookies? (11pm, mind you)

we sent a shoebox, totally unadorned and probably still containing the tissue paper and little beady packet things. we sent no valentine’s cards, candy, or other desserts for the (literally) snot-nosed kids in his class.

i felt guilt only briefly before i realized- we don’t care if henry celebrates valentine’s day by getting treats and cards because HE doesn’t care. he’s not even 2 years old! and, incidentally, neither are any of the kids in his little class.

so he came home with a box all beautifully decorated, full of cards and candy from the other toddlers whose moms aren’t total buzz kills. probably the same moms helped with the party. probably they shook their head when they saw poor henry with his lame box and no cards to give. probably they’re putting together a fundraiser or bake sale to raise money to buy him some nice lunchables and rice crispie treats because they’ve noticed that all he gets to eat are green smoothies and brown rice.

ah, well. so we blew this holiday. we’ll start working now on our homemade Easter cards. they’re going to contain live doves and pyro-freaking-technics and we’ll arrange for bon jovi to make a special appearance at the school to sing to all the kids and make them swoon.

so suck it, valentine’s day. 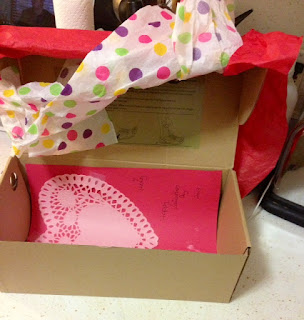