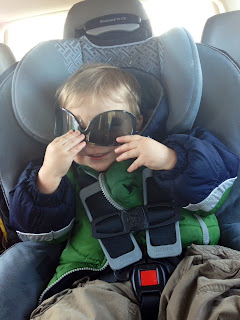 sassy mollassy is all attitude lately, and it’s, mostly, a hella lot of fun. i think we’re seeing a preview of what are known as the ‘terrible two’s’ with his willfullness and unpredictable meltdowns. but at least so far, it’s nothing that’s making me want to sell him.

he also sings almost full songs now and labels things as “funny” and “delicious.” when you ask him a question, he’ll casually say, “yea.” maybe not the most polite response, but to the point, friendly enough.  he also says “no” a LOT more often, mind you. and now when we offer him the choice between two things (usually a dumb idea) instead of just laughing maniacally, he knows what he wants and picks one.

and i cannot get enough of this video. it was much longer before i cut it down. i stopped it just before he totally wiped out on the floor. and then after he got up, he wandered over to under the highchair and started picking up stale pieces of food off the floor and tasting them. and then he tried to grab a knife off the dining room table, all while i filmed and giggled. so while i’m not showing you any of this ace parenting, i’m fessing up to it right here.

(but you can’t prove anything).