geez. i know it’ s been ages since i’ve written anything. i shall make up for lost time.

life has been a good sort of nuts lately. both of us started new jobs in mid-april and LUV them. so that’s good. but, you know, a bit chaotic. and then we went to disney world for a week of fun with my family and also for robb to compete in a triathlon. he did great and we had a ball and i’ll get to all that soon.

but this happened a few weeks ago and i have been meaning to write a post on it since then. it’s just too good/traumatic not to share.

i’m on day 2 of work at my new job and i got this text from robb. 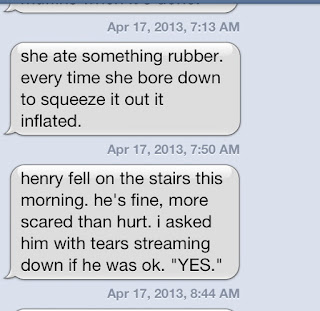 so i didn’t think much of it. our dog eats stupid sh*t all the time and has varying degrees of uncomfortable/hilarious outcomes. and i figure that robb meant henry fell down a *few* stairs. no biggie, right?
not so much.
it turns out that he tumbled down the entire flight of basement stairs when he was trying to go from the kitchen outside through the side door at the top of the stairs. and these are hard wooden stairs with nary a strip of indoor-outdoor carpet on them.
when i learned THAT bit of information, i almost threw up. i envisioned all the things that could have happened and it made me crazy for a while.
but, thank God he’s like good tupperware, and is very durable, basically just brushing himself off and keeping on.
robb took him to daycare that morning feeling all sheepish, “ummm, henry fell down the stairs…” but other than the little abrasion he got from indoor-outdoor carpet burn on his nose (which has since disappeared entirely), he was unharmed.
again. thank God. and i’m actually glad it was robb there. he’s reasonable and doesn’t immediately assume the worst and so reacts sensibly. i would probably have raced him to the ER and insisted on full body MRI, PET scans and a comprehensive taste test to make sure nothing had been damaged. 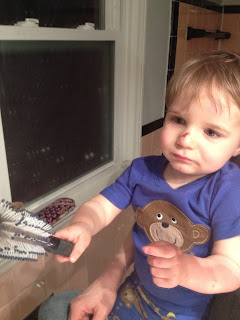 when i told my friends (guiltily) about the whole thing, EVERY one of them was like, “oh, sure. happens all the time. let me tell you the 15 stories i have about my kids falling from buildings and down open man holes. it’s fine.”