we’ve had a great couple of weeks. went to a fantastic wedding last weekend where we celebrated, with great family, a great couple. we all stayed at a dude ranch, so henry got to pet goats and pigs and miniature horses and tiny alpaca’s that were shaved badly and resembled star wars misfits. i didn’t put him on a horse this time, he seemed awfully little next to the other kids who were getting pony rides.

and he’s having a good time at ‘school’ (daycare).  learning letters and numbers and how to push people and make it look like they pushed you. so, that’s good. 🙂 he talks a lot about a few friends. our good friends’ daughter is on his mind CONSTANTLY. and he has a frienemesis at school named “kyle” who gets a lot of talk-time, too. apparently one or both of them is pushing or hitting the other regularly and one or both is getting time-outs and nice hands are to be used “ok?”  it’s a little hard to piece together these tales. especially because the staff all swears that he and kyle are chums and never beat up on each other. so i guess henry is just fantasizing about terrorizing this poor kid, or they’re doing it all when the staff isn’t paying attention. so that’s good…

he turns 2 next week! so robb took him to his well-child visit and it went great. he’s right on track for motor and verbal development (henry, not robb. well, i mean, robb, too, i guess). and the pediatrician with 30 years of experience treating children told us he was the most smartest, precious-est child she’s ever seen. (well, i mean, she didn’t SAY that per se, she sort of said it with her eyes. but i’m sure that’s what she was thinking).

he’s growing big. in the 60th-80th percentile for everything.

he still eats like a champ. this is him putting away 3 pieces of pizza (hold the cheese, add arugula, tomatoes, and basil to the crust and sauce) and part of a salad. 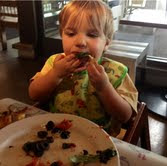 he can eat entire melon in one sitting. blueberries still fear him. he’s a great little mostly-vegan kid, enjoying veggies and fruits, beans and rice, nuts, pastas, and smoothies (in which we sneak all kinds of good stuff). every time we get a clean bill of health for him at these visits it makes me feel better about our quirky diet choices.

i mean, don’t get me wrong. he’ll still be a social mutant because of us not letting him eat a normal hotdog with the other kids, but at least he’ll have a healthy heart! so, that’s good….