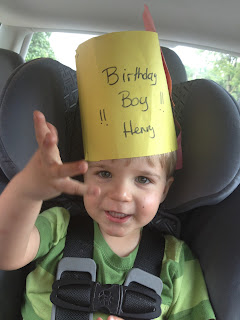 so this little person turns 2 tomorrow. every time i mention his birthday for the past two weeks, he says “henry birthday hat.” i had no idea how he even knew what a birthday hat was, but i’ve been meaning to go get him a pile of party hats to take to daycare with him for a little party.

i worse-mom-in-the-world’d it and totally forgot and totally didn’t even start making his cupcakes for daycare until 10pm last night either…and so sent him off to school this morning with (pretty delicious, thank you very much, might redeem me a little) strawberry cupcakes but no hats.

so i went to pick him up this afternoon and found in his little cubby, a homemade birthday hat that his teachers had made, along with a little present they’d given him. apparently whenever any of the kids have birthdays, they get this special construction paper hat made for them, and that’s what he’s been talking about this whole time. evidently, as soon as they all ate the cupcakes and sang ‘happy birthday’ to him, he started demanding the hat that he knew he had coming. 🙂

ANOTHER reason i adore this daycare, outside of hat rescues, is that after i’d picked up the birthday boy (literally. “carry. up! up!”), his blanket and sheet, diaper bag, birthday hat, present, lunchbag, etc, etc, etc and dumped it all in the car next to his car seat while i fastened him in….i kneeled on my keys, locked the car, shut the door and promptly started to swear. so at least it wasn’t hot out (ahem, june, wtf?) but my baby man was locked in the car! so i panicked only a lot as i tried to figure out how to get him out ASAP. ultimately, one of the amazing providers, who used to be his primary caregiver when he was littler, and who babysits for us sometimes, let me BORROW HER BRAND NEW CAR to drive home to get my spare key while she stayed by my car and entertained him.

of course he was unharmed and grinning like a goof when i got back. probably thought the whole thing was a game.  🙂

we’re doing a few fun things tomorrow with good friends and then his big family/friends party will be in a few weeks at the zoo!! more to follow.