I’m Afraid I’ve Been Keeping Secrets From You, Dear Readers 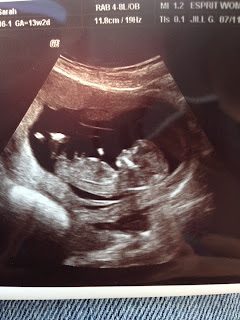 and it’s going well! 13 weeks now,  due mid-january. ultrasound today confirmed that all is well and baby is in there(!) and growing as indefinite gender pronoun should be(!).

i’ve been reluctant to share this superb news for a few reasons.

one- this happened very differently than the other pregnancies. it just kind of…happened. rather unexpectedly (as much as two informed adults with resources can be surprised by this sort of thing ) and easily and quickly…..and then it stuck! all of which caught me off guard. (if you know my history, you know that in the past it’s taken us some work to get and then stay pregnant). so it’s taken a little while to wrap my head around it and feel confident in it.

and two- this is dumb and not at all helpful to anyone- but i feel this weird sense of disloyalty to my fellow ladies in ‘the crappiest sisterhood on the planet’ who have had to or are still having to blood-sweat-and-tears their way to children. i wanted to punch people in the throats for whom it just “kind of…happened.” so, again, while in no way useful to them, my heart aching for them has interfered just a wee bit in my heart jumping with joy over the new little package i’m carrying in my gut. (well, just above my guts). –those i’ve told have been nothing but generous and gracious and enthusiastic, naturally, because they are some of the loveliest people i know—

anyway.  today i had an ultrasound that went well and i’m safely moving out of the 1st trimester and i’m getting more excited and less freaked out. (more of that later, for sure).

how have i been feeling? nauseous and sleepy, but overall pretty great! my hormones are all over the map, naturally. having these girly hormones racing through you does to your emotions what i imagine peyote does to your mind, man. i’m sort of raw and fragile and extreme and i just want to curl up on my blanket and look up at the stars while eating some snacks. and the weird dreams i’m having! vivid and disturbing and just wacky. also, i’m having bizarre cravings for very specific, random things i HAVE TO HAVE RIGHT THIS SECOND and then, once i’ve had it, it’s dead to me forever and the mere mention of it (or seeing the 400 pack i bought of them in the fridge) will send me retching. what else? the fatness came on way quicker this time and i’m looking roundish already. and i might be feeling the faintest fluttering of a wee one in there already, but, as always, it could just be gas. we are vegetarians, after all.

not telling henry yet, because 7 months is just too long to anticipate something for someone who’s only been alive a few times that himself. we’ll prep him as the time approaches.

will we find out the gender? not sure yet. probably not. we don’t much care, but i’m more tempted this time than i was last time. we’ll see.

so that’s our excitement right now. would very much appreciate your warm wishes and prayers sent this way.