Henry Monster and the Case of Paw, Hoof, and Beak Disease

so we’re transitioning henry from his crib (from which he kept leaping) to a ‘big boy bed.’  robb is dutifully researching healthy mattresses and we found a frame we like, but it’ll take a while to put it all together. for now, his crib mattress is on the floor, getting lost in the vastness of his bedroom. he likes it and feels important having a pseudo-normal person bed and a star wars pillow and everything, but i can’t help but thinking it looks like a cot in the corner of a jail cell (having NOTHING to do, i’m sure, with the fact that i just binge-watched the entire first season of the netflix series “orange is the new black” set almost entirely in a federal correctional facility). 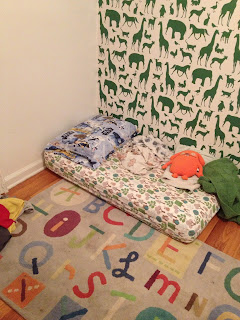 he does, occasionally, make a mad dash through the house when he’s supposed to be sleeping since there aren’t actual bars keeping him contained anymore, but mostly he just sits there and calls for us to come snuggle him back to sleep when he wakes up through the night. which he still does. nightly. 🙂
and then this (below) still happens fairly often, too. 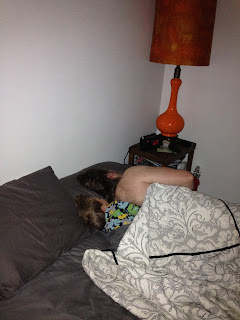 plus, this week all sleep rules (really, all rules) have been out the window because we’ve had a pox on our house. i have been dealing with a horrible sinus infection for something like a month that finally came to a head this week and is now (gracias a dios) receding and henry monster was diagnosed with his first bout of ‘hand, foot, and mouth disease.’ high fevers and mouth blisters and general crankiness. we haven’t really seen any spots on his hands, feet, or bum areas, but we’re monitoring.

my saintly mom has been here with him so that we can go to work and henry can avoid contaminating the other nasty gremlins at daycare. and after the first day of it, he’s really been fine other than a little soreness in his mouth when filled with anything other than a grape popsicle (see above: all rules out the window). so i’m hoping he can go back to daycare tomorrow and life can get back to some normalcy. but he and grandma have been having fun this week, so it has certainly not all been for nothing.

on the topic of having sinus congestion and being 16 weeks(!) pregnant and not being able to take much in the way of useful drugs to kill the symptoms…..it is what it is. i feel terrible for people who deal with congestion all the time in life or during the durations of their pregnancies and hope i’m not among that group. otherwise feeling good!

i’ll get some prego pics out soon. the little bump is growing, but i’m so far still in my jeans, so i hope it’s growing enough. we’ll find out at next week’s visit. (i think it’s probably just that i’m not eating fries and cake twice a day this time). 🙂