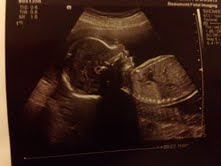 i had the anatomic ultrasound for the baby a few weeks ago and had to go back today to finish it because there were a few important structures the tech couldn’t visualize properly. i’m 21 weeks now. thanks to God, everything looks healthy and normal and perfect. this time henry and robb didn’t come with me, so henry wasn’t there to say the baby looks like an iguana and robb wasn’t there to stop me from finding out the sex.

i just like surprises too durn much. and we have 4 heart chambers and a closed spine and 2 complete hemispheres of the brain and all the right amounts of all the good stuff, so i’m happy. whether there is a P or a V down under doesn’t really matter.

i’m getting really excited. i’m a lot calmer this time around and just sort of expecting the best, i guess.

it most definitely helps that i have a henry to keep me busy and to fret over in real time so that the interminably slow pregnancy season doesn’t seem to be taking quite as long as last time. (but, srsly, it’s almost a year!! i mean, a YEAR!!).

and, as much as i longed for henry to become a henry, i was so wired when it finally happened that it took me a while into his wee life to chillax (robb loves this word) enough to really start to enjoy him. i feel like this one might have a leg up, because i’m calmer now and also because i know what a pile of joy a pregnancy can turn up.

henry might compete with his sibling later in life, but right now he’s doing the kid a huge favor by being so sweet and wonderful and making me anticipate more of the same. (don’t you make me eat those words, baby. don’t be a booger now).

and as nervous as i am sometimes at the idea of managing life with two, i love being henry’s parent so much that i’m excited to do it some more.

he’s taught me what it feels like to be totally content. like the circuit of my heart is complete when i’m holding him. now double that? holy moly. will have to grow more heart.