Too Cute to be a Sociopath? That’s a Thing, Right? And Third Trimester!!

but he kind of also wants to destroy. everything. always. just exactly like this. we don’t so much encourage that.

for example, every time we ride our bikes by this old folks’ condo complex near where we live, he says “that’s a castle. i want to knock it down.” we laughed the first few times, but he says it so convincingly and with such a straight face, we’ve gotten a little worried. if one brick falls off that building, or one window shatters spontaneously, i’m convinced…he’s ‘carrie.’

it’s a good thing i kind of sleep with one eye open anyway.  i wouldn’t want to get broked.

sleep isn’t something i do a whole lot of recently. and not just because i have a healthy fear of my 2 year old.  i have now officially entered THE THIRD TRIMESTER of this pregnancy.

…which is awesome. it’s reassuring that things are going this well and we’ve made it this far and (pending a repeat ultrasound on thursday) all is well with the new baby.

it also means that uber weird things start happening to what used to be my body and is now a cow alien spaceship thing. the baby has gotten really active lately- big movements that can not only be felt through my abdomen but also CAN BE SEEN. just exactly like this.  i don’t remember that from henry’s pregnancy- i think both because i was 20 lbs heavier that time around, and also because my abdominal wall is stretched so thin from the first round that it’s like a stained glass window now and it just makes sense that we’ll be able to watch the baby swim around in there through my tissue.

in all seriousness, i love experiencing the movement and am getting really excited. it’s starting to feel really real.

also- now i have to time to focus on the baby! regarding my recent post full of anxiety and whining- i passed my boards! and don’t need to re-certify for my license until henry is in 5th grade! so one by one my october stressors are melting away. thanks to God.

i thought it’d be fun to set up a little wager for this baby’s sex, due date, etc. if you’re interested, check out: http://bellybets.com/betting-sheet-1002338.  the winner will get to dictate that we take a pic of the new baby in any outfit/setting/situation they choose. (within reason, of course). 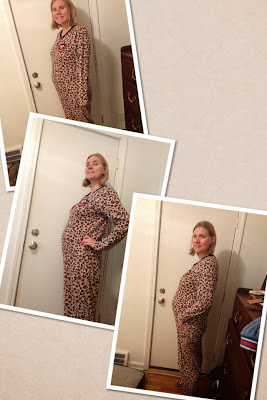 hope you’re all having a great week so far! toodles!