i dunno if i’ve mentioned it before, but i had financial reasons (work benefits thing) for waiting to have baby deuce in 2014.

and we did it! good work, squirt. now you do whatcha gotta do. anytime is fine. i’m anxious to meet you & to get kicked on the outside for a change. however, i do appreciate how very quiet you are right now, while contained herein.

i am wondering how in the world we’re going to manage with two. as it is, the house is a mess & the critters are running wild.

our old dog still kind of wanders the house all night, despite our efforts to crate her and keep her on a schedule.

and this is what ‘putting our foot down on him sneaking into our bed at night’ looks like. “cold turkey,” i said. “we’re done with this nighttime shenanigans,” i said.  for real. 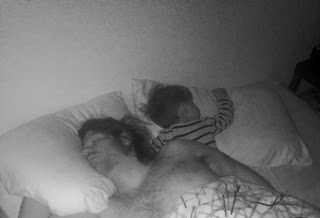 here’s an example of what a smooth operation we’re running. ahem.

last sunday, we were celebrating Christmas with robb’s family here at our house. 10 minutes before we were scheduled to leave for brunch at this cool local place, henry was refusing to get dressed and negotiations weren’t going well and i was bursting with the need to pee. so i put him down off the changing table to run to the bathroom quickly. i just asked for a 2 minute time-out. well, naturally he followed me to the bathroom, and as i was trying to gently close the door to keep him out and not to scandalize the entire house, i shut his hand in the door.

thank the Lord, he was just fine, but it was traumatic indeed. so much so that we skipped brunch and let the rest of the family go while i stayed home and in complete guilt, gave him whatever he asked for for breakfast and let him watch 40 episodes of ‘curious george’ in a row.

i became awful glad, though, that we weren’t in public, when a short while later, while i was in the kitchen, i heard from his throne in the living room “eww. my hand is dirty.” filled with dread, i went in there, and sure enough- there was fecal matter everywhere. i mean, i don’t know how something that small contained that much poo.  it involved an immediate bath for him and change of clothes for me and a bleachy hose-down of much of my house.

and that’s just one kid and one dog.