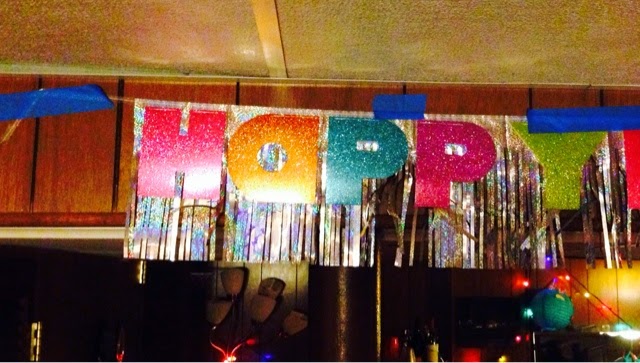 my self actualization is destroying my house. it’s a total mess and i’m trying not to care.

all the good work that i’m doing on the inside to be patient with myself, loving and forgiving, less anxious, to keep my priorities in order and BELAX, MOMMY… all that puppies and sunshine and shit is interior and, consequently, leaving all the outside stuff in shambles.

here’s why i bring it up. we threw anna’s first birthday party this last weekend. that’s right, 16 days after Christmas. because that’s when her birthday is and sumbitch, it is what it is. so i sort of sent out invites and i sort of planned some foods and some drinks and some people to show up, but i less than half-assed the whole thing. i maybe 1/16 assed it.

so instinctively i feel guilty and worry that i’m failing my second born and she’ll have inferiority complexes she can trace back to this first birthday that was supposed to be, like, circus-themed or something, based on the invite, but that boasted nary a clown or cotton typed candy or popcorn or balloon that wasn’t on the floor and being kicked around by henry. there was no theme. there were no cute cupcakes with candy face parts made to look like animals. pinterest did not come to this party.

i (GULP) used boxed cake mix for the cupcakes (full disclosure, losing zen points: we made our own ice cream, but it’s something we do routinely so hardly counts against my chill, right?!). i made no jungle juice. i bought beer. i bought anna exactly 1 thing for her birthday. (full disclosure, losing zen points: it was a book that i had made online about her 1st year of life and it’s adorable and she’ll treasure it always. crap). i put up some really weak decorations. with electrical tape. (see above)

but OVERALL i belaxed more and fretted less. i just didn’t feel like worrying about everything.  there will be future birthdays when she’s into the theme and i will stop at nothing to find her a real centaur to ride around the yard. or whatever. but she’s one. she ate the boxed mix cupcakes and the balloons on the floor and was happy with both and mostly didn’t choke on either.

the house wasn’t immaculately clean for my guests. it isn’t going to be. i work a lot. robb works a lot. not only do we work at our jobby jobs, but we’re also stewing around in some start-up business stuff and managing 2 small monkeys. the house isn’t filthy, it’s cluttered and so what, right? clutter means people are busy living life.

we’re doing just fine at living life and if people see some evidence of that and worry about my clutter, that’s on them, not me.

the progress i’ve made means that i don’t care (as much) that things are chaotic and incomplete and messy. because 1) you can’t always control what happens but you CAN control your reaction to it, that might mean re-setting your expectations so that you don’t perceive yourself as always falling behind and 2) if something drives you crazy about yourself, you either work really hard to fix it until you see improvement or you laugh it off as one of your quirks and move on. like messiness- i’m laughing and moving on. and 3) i forget three. and i don’t care.

i don’t read many mom blogs, like at all. something about time and energy and lack of connection. also, i’m afraid it will turn out that all my words have already been said by someone else or that i am terrible at this and i don’t want to know that. but one i do read and love is momastery. she talks a lot just being messy and choosing love over perfection. she made a great point today that “we think we’re somehow being good parents if we beat ourselves up for every mistake.” that’s so astute. i think i think i’m supposed to feel bad for keeping things kind of simple for a 1st birthday party, when in reality, anna probably had a better time than if we’d added a bunch of stimulants and if i was bustling around all worried-like.

i want my kids to live simply and have be content with less. with fewer, more important things. i have to do that first so that they’ll know how. and my guilt over this isn’t love, it’s distraction from love.

i haven’t slept in a while, so if this all sounds goofy, my apologies. and if other mommy bloggers are saying it way better…i have cookies and i’m willing to share.