This Weekend Was a Suck Sandwich: Illness, Injury, AND Poison Control, Oh My

By admin on Sunday, February 8, 2015
i’m a prisoner to sick children this weekend and it’s put me in a foul mood. i think of the 60 hours i was home over the weekend, i was out of this claustrophic sick house for a total of 5, and 2.5 of those were spent with sick baby in the emergency room.
all is fine. or all will be fine. but i am an underslept, worried and angry, milk machine. i’m guilty about neglecting henry while tending to anna and guilty about being absolutely over anna’s constant crying. especially considering that last night i was praying for her to just PLEASE cry….

and this is after months of cough and snot more often than not.

it’s normal for a baby to be sick some 13+ times in their first year of life. mostly little bugs, with varying degrees of annoyance/danger. but if you’re really good at math, you’ll see that that is > 1 illness/month. and some of these bugs last a few weeks. so, you might get 5 or 6 days of wellness a month. this is especiallly true in cold weather states where people are stuck inside all the time in the winter. so, pretty much, our kids are sick-esque from novemeber through march/april. ILLNESS.
neat.
as an added perk, and a really great item to catalogue in the Working Parent Guilt Log, daycare kids are more likely to catch all the ills. this makes sense, since they hang out all day in the lab that grows Swine-Hoof-Whooping-Influenza A through Z-Dystentery-Consumption-Pox and the monkeys in the lab all cough deliberately into each others open throats. hand washing is mandated by the scientists in the lab, but the monkeys find disgusting ways to apply germs to one another anyway. (but i will say it gets better over time. henry has gotten progressively fewer illnesses each year. surely by next year, his 5th year around the sun, his immune system is a fortress with a moat full of sharks with laser beams on their heads).
i’m not getting into the topic of vaccines today. i’m too tired. i’ll post on it later, if anyone wants me to, but the data is pretty clear. read reliable sources and you’ll draw the same conclusion that i have that the benefit greatly outweighs the risk. any preventable bugs that have vaccines should be prevented. it’s all these other sumbitches that are getting me down.
ANYway, so we had a long night. i’m pretty good about not overreacting to my kids’ malladies, but this freaked me right out. anna had been coughing with a runny nose for a few days and actually had a decent fever friday afternoon, and she was pretty clingy and fussy all day saturday. we changed our plans for a date night to a friend’s birthday party and i went alone. when i got home around 11pm, anna was up with robb and visibly shaking, despite not having much of a temp. in the light, we could see that her lips were blue and she was breathing really fast. her lungs sounded fine, but she was acting really weird for her- really quiet and still. i’m in medicine (adult, female medicine) and TRY to be reasonable, clinical, and rational when it comes to my kids, but i fail. (plus, i know about as much about pediatric medicine as i do about veterinary medicine- although, incidentally, i think the two are pretty much the same thing).
but this combo of symptoms had me worried, so i decided to take her in. well, about half way to the ER (only 10 mins away, blessedly. i could never live anywhere more remote. my nerves couldn’t take it). she was silent. not fussing, not thrashing, barely fighting me when i poked at her from the front seat. i started to think maybe i should have gotten an ambulance, and oh my God, oh, my God…. 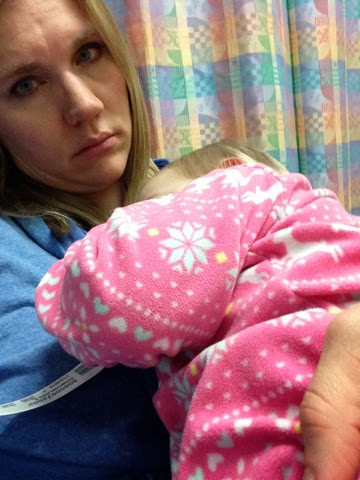 they got us right in, we were practically the only people there. they checked her ears, lungs, urine, and brought down the fever she had, which took about 2 hours. 2 hours of that glossy-eyed, barely moving, not crying worrisome version of anna. at one point the ER resident said something like, ‘well, you know her best. you tell us.’ which is basically a parent panty-dropper, and i think means medical education has caught on that parents like to feel included and not talked down to by their kids’ docs. (success!!) then BAM she was back to laughing and shouting and trying to fling herself off the ER cart. but that was a long, scary 2 hours. they decided she had a bronchitis/early pneumonia, maybe early ear infection and gave us a steroid and an antibiotic (her lifetime first). 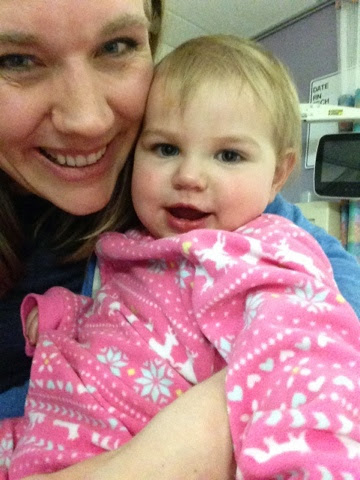 ^there she is. finally.

so as hip as i am to being in the hospital around sick people, i kind of really hate it when the sick people are mine. it’s a totally different experience.
so today, she’s acting normal-ish. feisty and active, throwing her body into everything she does. including, as she came running/crashing across the room, sliding head-first into the bottom of the couch and giving herself a really nice black eye with a few scrapes. INJURY. 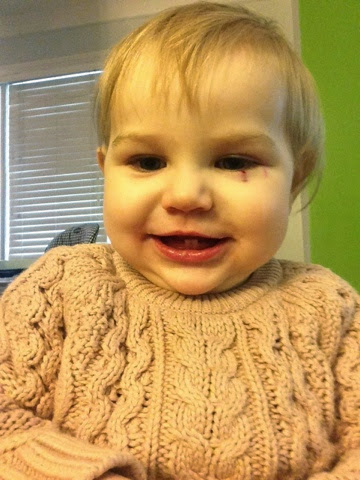 ^you should see the other guy

AND THEN. apparently she chewed threw the eye mask/ice pack thing i used on her swelling eye, because i found her in a corner, quietly enjoying a snack of the little blue balls that it (had) contained. so POISON CONTROL tells us not to worry, she’ll just be able to keep beverages chilled for us under her armpits from now on.
she fought sleep all day today and the only thing that kept her quiet was nursing, and it was all me because (well, because i’m the one who nurses) we were trying not to ruin henry’s life with all this, so robb took him out a lot while i stayed in with anna.
now it’s their bedtime sunday night and since i know she’ll be up most of the night and i got less than 5 hours of sleep last night, i’m going to sign off and make my way to bed, since i have to wake up and go to work at 5am. my sainted mother dropped everything to come rescue us so we could go to work. (again. #best)
fml. sometimes i just want to primal scream and weep. (and to everyone with older kids, THIS GETS BETTER, RIGHT!?!?)
thanks for listening to my whining. after i sleep i’m sure i’ll feel peppier.
oy.
0
Previous Post
Next Post