i sat for a while in my car debating hard whether the hour i got away from the chaos at home would be better spent on my brain by blogging or on my body with yoga.

a girl who can go ahead and wear those yoga pants proudly walked by in front of me holding her yoga mat and i thought, ‘do i want a cute butt? yes. yes, i do want a cute butt. but i want some inner peace and purge more.’
and so here we are.
so what is new? oh, yeah! so, i totally cheated on robb last weekend! it was great. i had a getaway long weekend and i had the juiciest romantic entangelement with my long lost lover, Sleep. we stared longingly into each others’ forgotten eyes, Sleep and I, and then, well didn’t exactly ‘roll’ in the hay, more like ‘lied still like a corpse for 10 hours’ in the hay.
it was hot.
and robb is a rockstar for staying with the minions. his parents came and helped and they all did fabulously.
and now i’m back to reality and i’ll have to just write love poems and send dirty texts to Sleep until we meet again.
anna was up from about 2am-4:30am last night. so getting up at 5:20am to shower and go to work was a little rough. being friendly and useful and professional and decisive all day at work and then being available and patient and brave for my kids at night….it’s hard on no sleep. i went to the library before the whole car deliberation thing and as i was driving around the parking lot, my dark thoughts lined up into something like, ‘if i don’t find a parking spot in this lot i’m just going to go drive into a river.’
eesh. really? a river?! holy dramatic, batman. this is what no sleep does to a person.
so, yeah. she doesn’t sleep. i can’t make her sleep. i have no boob to offer her anymore since i’m reclaiming them and now i have nothing to offer her. i don’t know how to fix this for her. i fail FAIL fail at getting her to fix it for herself. i’m as inconsistent as they come as far as letting her cry for a while and then racing in there to guiltily rock her until i get frustrated and then putting her back down and….i feel totally inept. i want to give up.
and then river. and yoga butt.
but still. she’s a feisty kid. she runs hard at life. it’s exciting and a little scary. she’s more and more like ‘stitch’ from ‘lilo and stitch.’ see this cute picture? yeah, that’s her playing behind the table where she doesn’t belong, trying to pull the lamp down on herself for head trauma/electrocution purposes. smh. and today she pretty much ran into the street because we are now in that phase of cat and mouse where the cat is trying to prevent the mouse from offing itself all the time.
cute. 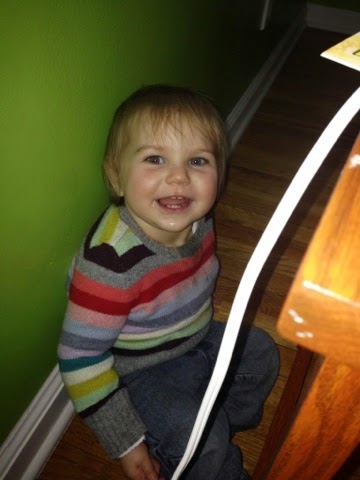 but now she also likes to read. a lot. same book 40 times in a row. we’re ALWAYS going on a bear hunt. and you got me how she is still surprised to find jemima puddleduck behind the gait. jemima lives behind that freaking gait, man.
i need some sleep.
we most def went through all this with henry. he didn’t sleep all night until she came along (his age 2.5 yrs at that time if you’re counting), so reasonably we can expect that unless we change tactics, middle of the night game on for another 16 months? something like that.
i’ll get back to thinking properly in 2016 some time, i guess.
but being done nursing is a relief. so much time i have now.
oh, but …i tried on bras last night. i’m trying to think of an apt metaphor for the post-nursing/pregnancy breast tissue that is left behind….it’s like….you know those things you can buy in the gag gift shops? pretend cans of nuts that contain a pile of long, thin, kind of shapeless snakes?
yeah. like that. the nut can is the bra and the unweildly snakes that fall all over the floor are the boobs.
or….take a piece of bazooka gum, right? so it starts all hard and tough and then it gets chewed and chewed and pulled apart and stuck to a shoe and scraped off with a stick and then ends up under a movie theater seat or park bench or something.
right. they’re like that. before and after.
hot.
(next post i’ll whine less and i’ll actually mention the other kid. he continues to be funny and awesome. this phase with henry is most definitely easier than the current phase with anna, so at least in my blog rants, she gets the most attention. but i’ll tackle his goofy sweetness soon).
‘night. (for now)
0
Previous Post
Next Post