Disney World and Universal Studies, 2015 (The Time We Almost Broke the Children with Magic)

have you ever accidentally watched one of those japanese game shows where everyone is talking loud and high and fast at once and there’s, like, stuff spinning, and feathers for some reason, and currency falling from the sky and a robotic animal is marching across the front making you uncomfortable with its direct eye contact into your soul?

that’s what disney is like to a 3 year old. 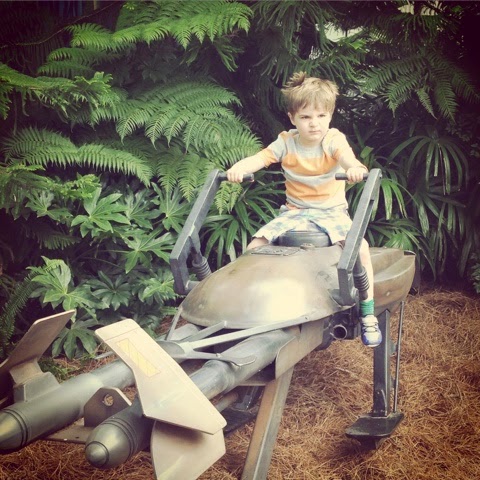 but we had an AMAZING time. it was the best time spent with my phenomenal parents and sister and almost new brother-in-law (who is GREAT, btw. we’re very lucky. <– that’s a small sample of my maid of honor speech. spoiler alert: the rest is a moving rendition of ‘the wind beneath my wings’ with interpretive dance and streamers).
the weather was hot and sunny most of the time, the crowds weren’t bad at all relative to how they are much of the year (we never waited more than an hour for a ride, i think), and the accomodations at the beautiful condo my parents so generously rented for us all are incredible. we really had so much fun and as soon as we left we all wanted to go right back.
but, poor henry. disney is a lot to ask. this phase of toddlerhood is a lot like i remember early high school feeling. you have all these huge feels and you don’t know what to do with them, so you get obstinate and try to control anything you can. we heard a lot of “i don’t like-” and “i don’t want to-” from him, which is hard to hear when you’re at the most bestest place on the planet, that is, allegedly, custom built for short people like him. 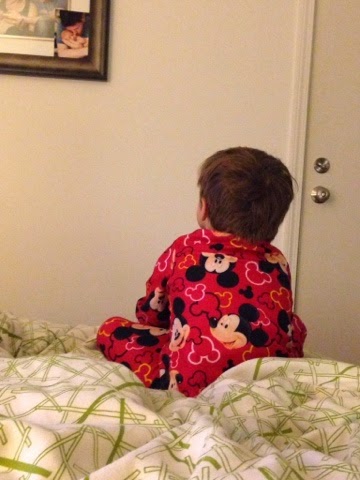 but now i realize, i’m not positive he even really knew what disney was before he went. “that’s where mickey and cinderella lives” is sort of vague and confusing, right? so pretty much i think he would have been happy if “going to disney” was playing at the hotel pool all day every day and eating more candy than he usually gets. 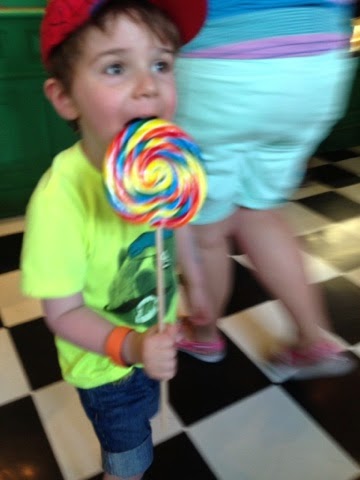 and once we got the hang of how to make naps and meals work near-ish their normal schedules, and how to accomodate his actual desires instead of our assumumptions of what his desires should be, it went pretty smoothly. he LOVED LOVED LOVED the teacups and It’s a Small World, and that’s what it’s all about, right? he could give two hoots about most of the characters (from movies he watches constantly) but was all about woody woodpecker, who i sincerely doubt he’s ever heard of. weird. 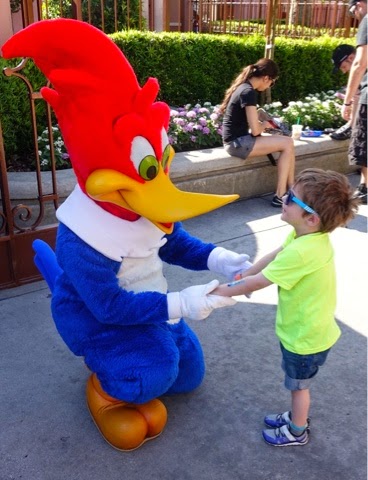 i think in a few years, he’ll be all about everything there. but it is a difficult place- it is a busy, hot and loud and every single ride, show, passage, and bathroom empties into a gift shop. so kids hear “no” all the time when constantly asking for merch. and there is a lot of sugar available.
the kids got along great and are closer after the trip. 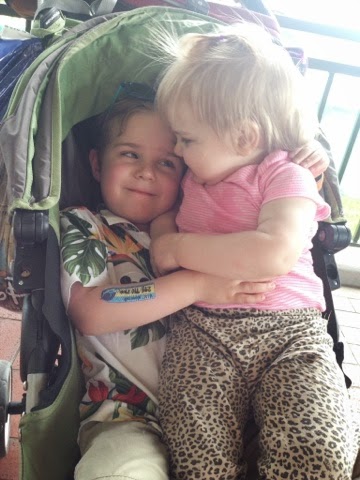 anna was a trouper. she just road along on my front pack most of the time, kind of sleeping here and there and checking it all out. of the 40,000 people who come to the parks daily, she waved until she received the attention she wanted to about 39,500. we heard a few times things like “she’s going to be a diplomat someday” because she was so precocious and friendly.  i feel a new level of attachment to her after all that concentrated time. it was wonderful. her favorite thing was playing in a very public splashpad along the main walk at EPCOT. she was soaked head to toe before i thought to remove any articles of clothes/shoes, so now we have disney towels. 🙂 henry enjoyed it, too, but we had learned, so he just went in his skivvies. you’re welcome, other tourists!! 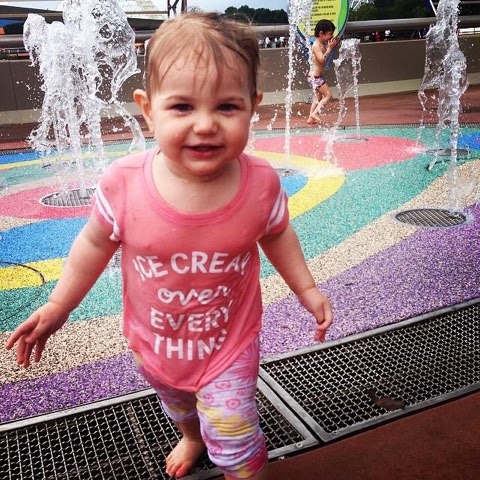 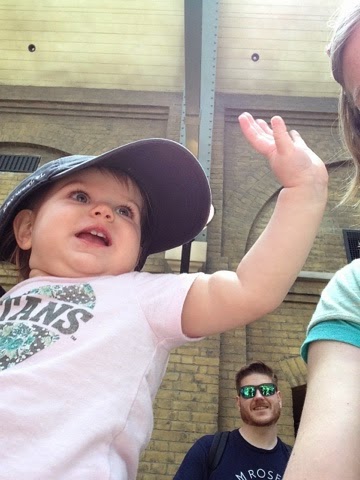 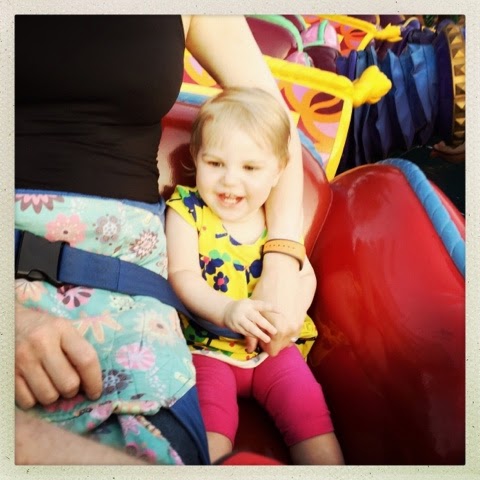 i could go on and on. i haven’t even mentioned how the harry potter parks at universal which were EPIC. 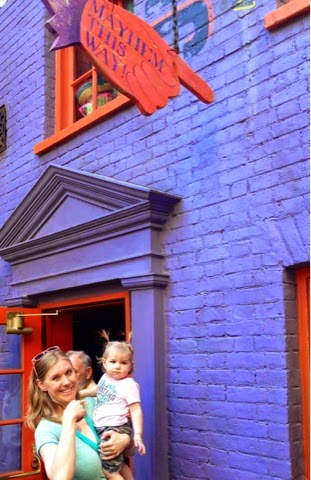 i feel badly that there was any stress and that i wasn’t always as cool and happy as i wish i could be on the trip. being totally honest, and this might not surprise anyone….disney is my favorite thing ever and so anything that interferes with my enjoying of disney is annoying to me. crabby toddlers and hungry, tired babies are some of those things. so once again my sarah self and my mom self were in disputes. but they eventually worked it out. and to expect nothing but smooth sailing on a trip like this is unrealistic, since taking these people to the mall or grocery store right now is a crazy challenge. this is waaaay more to ask than any of that. so i’ll let myself off the hook and just start a new countdown calendar for next trip.
cannot say enough THANK YOU ONE BAZILLION TIMES OVER to my incredibly wonderful family and amazingly generous parents. henry and anna have the best grandparents ever. (i mean, besides my own personal grandparents. they set the bar extremely high). 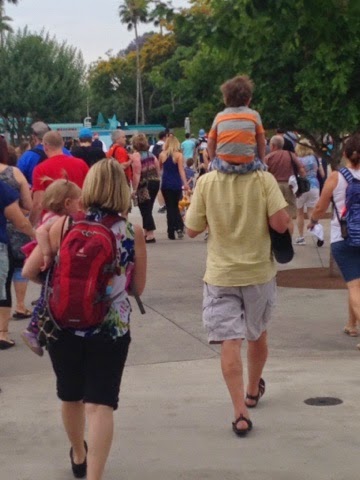