How to Person Parenting is Hard

BUT MOMMY CAN WE PUT BLUE SPRINKLES ON TOP?

By admin on Sunday, November 22, 2015
i had an enlightened moment today. i’d been feeling guilty (again) for yelling at my beautiful children so much this weekend (again) when i was single parenting (again) and when robb came home and asked how i’d fared, i went all tragic, ‘i screamed so much and i told anna to shut up once. oh, god. i’m awfuuuuuul!!!’ and then i cried in the kitchen and then i went for a run.
the first half of the run i continued my chant of how much i suck and how i hope the kids don’t remember me as this awful, harsh, fun anchor and how they might be better off without me.
and then the sunshine and the snow in the trees and a few minutes of peace, alone, listening to Fergie with my endorphins working and started thinking…G-L-A-M-O-R-O-U-S…and also….when robb asked me that question, it was in a clean house, both kids, fed and fine,  were sleeping, i had fared. this weekend, taking care of 2 toddlers by myself, i ALSO made a pot of soup, read a million books, had a snow ball fight with the snow snot that fell out of the sky and hit my front yard, and took them to the farmers’ market AND library. i made pancakes AND we made and decorated Christmas cookies. 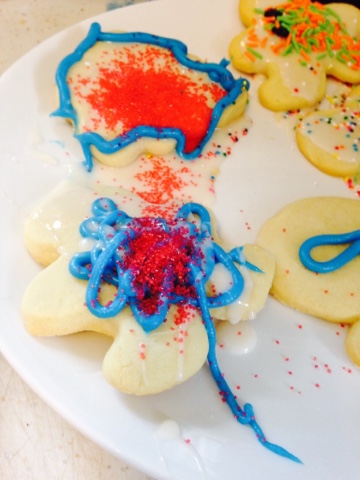 the cookies.
so, what gives? why am i hating on myself so much? because i was stressed out the whole time and i just KNEW the kids could feel it. but what are the facts?
so, yes, they watched a lot of movies, they ate only carbs (did you see the thing about the pancakes AND cookies, and also there was some white bread from the farmers’ market, OK STOP JUDGING, IT WAS HARD. THEY ARE MEAN) and we fought over meals. and i a little bit threw a chair (at no one). and when we lost the apple TV remote we almost had to move. and somehow potato chips ended up spilled in the bathroom. and when henry saw me cleaning in there he was so alarmed by the strange site, he got confused and thought we were going to make the cookies in the bathroom, maybe? 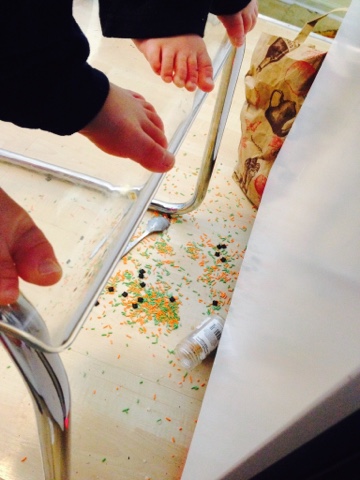 floor below the cookies.
but why don’t i focus on what i did well?? really. WHY?
and can i change the narrative in my head so i feel like less of a failure?
last night after the kids and i had a collective melt-down and bedtime was pushed forward and cookie decorating pushed back to the next day and everyone cried….and then everyone talked….and then we read books and then they were falling asleep….i was still panting from the trauma of the fight, but they weren’t. they were fine. in fact, as i’m rocking and sucking my thumb in the chair in the corner of their room, pretty sure i’m the most despicable mom of all time second maybe only to joan crawford, henry whispered, BUT MOMMY, CAN WE PUT THE BLUE SPRINKLES ON TOP?
he was just worried about frosting his cookies.
he’d forgotten all about the fact that i forced him to eat poison quinoa soup and that i’d scared him when i a little bit threw that chair.
i have to believe two things, when we all survive to the other end of this kid/parent thing.
1) i’ll be left with the impression that they were adorable
2) they’ll be left with the impression that i was wonderful
i say that confidently because my parents only talk about how great i was when i was small and i KNOW i was a bossy, snotty piece of shit much of my childhood. K. i know. you don’t have to hide it.
also, my mom has told me all the ways she was impatient and frustrated and freaked out and failing us when i was a little kid and i remember….none of it. i mean, none. not once. not once do i recall my mom being anything but loving and put-together. i know it happened. logically, it must have. she was taking care of 3 small children, one with major health issues and a developmental delay. she must have had terrible days. and i also know that she chewed ice and fretted constantly. but i only know that stuff because i’ve processed it as an adult. leaving childhood, i just felt like she thought us three kids were the bee’s knees and that she was thrilled to be our mom.  and, ultimately, we all turned out to be functional, happy big kids/adults. (twitch twitch) so, basically she nailed it. but she didn’t know it at the time, but hopefully she does now. i’m thinking i get that.
another revelation is that these kids are different with mommy than they are with daddy. and how.
robb’s been noticing for a while that they’ll shout for me, across the house, while sitting in his damned lap. he’s like, “what are you doing? i can help you.” and they’re like, “OH.”
and i don’t want to speak for all moms/dads, but in our experience, this mom gets the fiercest attachments with the most intense moments of intimacy, but also is the brunt of their most asshole-i-ness.
i never don’t have a wound on my face from anna’s claws. i never don’t have a wound on my self esteem from henry telling me hates me or him not listening to me as i beg him to do something. i really hate feeling inconsequential. and somehow my self worth is tied up into how they treat me. instead of just assuming he’s a schmo who needs to be more respectful, i take it personally and also think maybe his bad behavior is a reflection on my piss-poor parenting?
but, after last night, when i couldn’t help but debrief on the rough day, he said, TOMORROW WILL BE A BETTER DAY. AGAIN.
🙂 again. because as far as he was concerned, yesterday was super. ;)-

i have to believe they won’t remember all the yelling that i do. all the swearing under (and sometimes over) my breath and the look of panic on my face all of the time.

just like eventually, soon, probably, i won’t remember the total anarchy of having two toddlers trying to kill me. i’ll forget how they refuse every meal i ever try to feed them but want snacks constantly and i’ll forget being held hostage in their bedrooms an hour after we started the bedtime dance, trying to remember how native americans snuck up on deer in the woods (on the balls of their feet? heels? nope. balls) while i creep around the floor creaks trying to get out with my life.
i have to believe eventually they won’t shout all the time and will actually sometimes quietly listen. i have to believe they get that i love them even as i’m losing my shit.
it might not be until they have their own kids that they’ll understand how hard i fought to stay positive and kept fighting for their wellness and my sanity, my marriage, and our family. 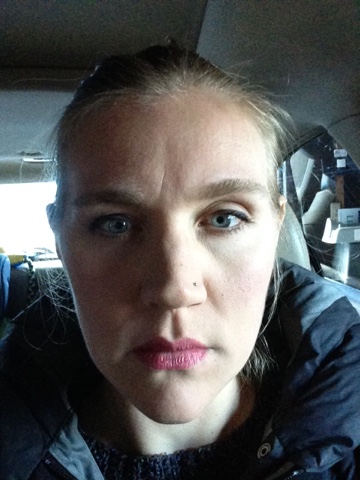 “Pour yourself a drink, put on some lipstick, and pull yourself together.” -Elizabeth Taylor

if you guys are ever reading this….henry and anna….i love you. i’ve always loved you. i’m trying.
and i’m sorry about that chair.
it had it coming.
0
Previous Post
Next Post