Get Off My Lawn/I Want to Be Lady Yoda/Wait, Is That Already Oprah?

By admin on Monday, March 21, 2016
you know that thing where you age and you’re confused by everything?
i’m not old. i’m 35. that’s not even half my lifespan. and if i keep eating this weird vegan food it may be only, like, 1/6th my lifespan or something. (kale might make you live longer, does nothing for your math)
but i’m aware that i’m not young, either. my back hurts all the time because i do this dumb thing where i insist on walking on my hind legs without asking for help. and i’m terribly out of the loop when it comes to modern idioms and pop stars and reality television.
i guess no one nae nae’s anymore? i’m so disappointed. i learned that sweet move from my 4 year old.
i refuse to look up what ‘on fleek’ means because for the longest time i thought they were saying ‘on feet’ and i thought it was a pedestrian thing, and then i thought ‘on fleet’ was like a military thing? like maybe it’s navy week or something? and then i just gave up and ate some more metamucil wafers.
my grandfather, who passed away last year and we just miss him all the time (hi, Big Hank! love you! stop messing with the angels!)…he was way hipper than any 90 y/o should be. he was on facebook, up on current events, etc. but he thought LOL meant “lots of love,” which i guess it did at one time, or does in some circles….anyway, he missed when it changed to ‘laugh out loud.’ it was endearing except those few times he used it regarding someone’s recent cancer diagnosis or horrible car accident.
but, yeah, otherwise he was nailing it. i’m not nailing it now.  i’m already past clueless and i’m, like, 30 years away from being 90.
only with the younger people whom i really trust, will i admit my ignorance. the residents (doctors) who are 10 years+ younger than me…or the people in my writing class…sometimes after bridges of mutual respect have been built, THEN i’ll be like, ‘ok, wtf does ____ mean?’
i actually was going to use a specific example there of an acronym i didn’t know that i learned in class the other day, but i CANNOT REMEMBER IT RIGHT NOW.
oy vey. it was really good and i planned to use it long past its current relevancy period, and i’ve already forgotten it.
oh, well. i just have to get really wise and noble and eccentric and then people will think i’m like, ‘above’ what’s hip. they’ll think i must have higher braining going on and can’t be bothered with flash in the pan trends. when i don’t know what in the world someone is talking about, i will just close my eyes like i’m having a prophesy.
i just have to try to be like Lady Yoda and not care that i don’t know how to climb a vine or snap a vimeo or tinder things. 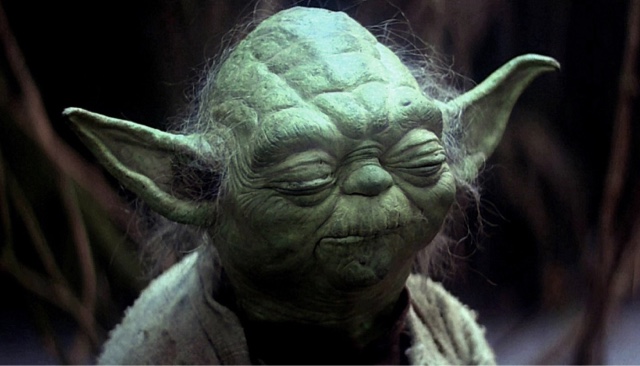 The “Me Project,” When The Priority is Pretty

The “Me Project,” An Intro