First Kid Problems as We Head Toward School. Let’s Just Be Honest, He’sGoing to Have to Parent Himself. (3-Piece Suit and Stick-on Mustache toParent/Teacher Conferences, They’ll Never Guess)

By admin on Thursday, March 31, 2016
We’re preparing for kindergarten.
We’re ALL preparing for kindergarten.
In addition to reading chapter books as a family, setting rules for when it’s OK to have one’s penis out of one’s pants, and encouraging independence in maintaining self and stuff, we’re also giving Henry chores around the house. It’s going so great. So great. Three days in to him wiping the table down after we eat, he’s trying to Tom Sawyer Robb into doing it for him.
We’re also all learning how to take criticism. It might be worse for us biggest kids than it is for him.
See, he’s been a less-than ideal citizen at school this past few weeks and has been getting into trouble. So, we, his nighttime keepers, we have to respond in kind with the teachers and get him to shape up.
He’s always been such a compliant little guy, and OUR LOVE CAN FIX ANYTHING, so I just assumed a few days of hugs and reminders and withdrawal of Easter candy and television would get him back on the nice list.
But, nope.
So then we started this behavior chart sticker thing.
But, nope.
So, today, we had to step up our parenting game, and IT WAS AWFUL. I hate stepping up game.
We don’t spank. So far. So our ‘awful’ is really us only putting the hammer down delicately on a pile of afghans. BUT, nonetheless, he was so upset. We rubbed his tiny nose in the TV and candy the rest of us were enjoying and largely confined him to his own room to work through the nervous breakdown he struck (and redecorate his closet, as it turns out). He came through it and seems to understand the expectations better.
We’ll see what tomorrow brings. Oy.
I thought infancy/toddlerhood was hard because you have to go and keep the kid alive and not lose all your hair to them as they yank it out by its roots and stuff…but I’m beginning to fear, nay, anticipate, that there may be WORSE PARENTING SHIT yet to come.
Our reactions when we hear he’s being a menace are the following:
1. Oh, God! Is he sick? Wounded? Did some terrible shadow person touch him? WHO DO I KILL?
2. Was it the other kid’s fault? Because my precious snowflake is very kind and loving and surely must have been provoked?
3. He looks up at me with those giant Disney princess eyes and tells me he has no idea what happened…so maybe the adult teacher in the class who’s been doing this for 10 years was mistaken? Or has it out for my kid? WHO DO I KILL?
4. Well, shit. I guess it’s possible, though unlikely, that sometimes my beautiful child of the universe can be a bit of a dick and needs to stop being a dick so he can get along well with others.
5. Wait…what? You expect me to do something about #4? Why me? Come on. Make someone else. This sounds like emotional toil. He likes me! I want him to like me! We’re buddies! We have a secret handshake!
6. He doesn’t want to do the handshake because he’s mad at me now because I made him go to his room without any jelly beans. WHAT IF HE NEVER LIKES ME AGAIN!?
7. He’s gotten through the crying all on his own. He is showing pretty decent levels of remorse. He’s hugging me now, but I also kind of think he’s frisking me for jelly beans.
8. We have to do this whole thing again tomorrow? ARE YOU KIDDING ME???
So, there you go. We’re learning how to parent a bigger kid and he’s having to learn how to kid a bigger parent.
It’s exhausting. He’s 4. They stay under our care until they’re 18 or something, right? Is this why people have more babies when their older kids get big and snotty and require this master level parenting? Because I get the just wanting tiny cheeks that are thrilled to see you and only occasionally need redirection, but not, like, reprogramming. I get all that. But I suppose then the cheeks kid grows up to do the shitty kid thing, too, huh?
So, we’re all headed to school in the fall, kindergarten or bust. We have to be mature or we don’t get jelly beans.
Fine. Whatever. 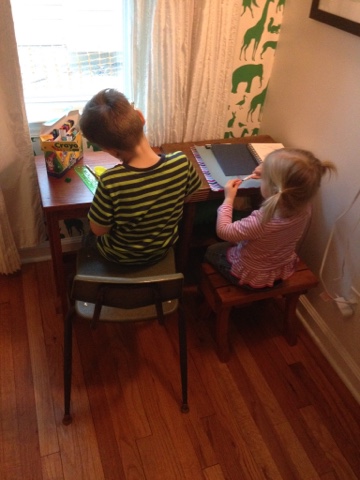