Pink Is Just a Color. A Bitchin’ Awesome Color.

By admin on Sunday, April 3, 2016
Lately, Anna is making herself into a pink everything. ‘I’M A PINK CAT.’ ‘I’M A PINK REINDEER.’ A few days ago she was a ‘PINK ZOMBIE’ and today, when she was talking about saving someone and I told her she was a hero, she said, ‘YES. I’M A PINK HERO.’
I know she’s only two. She’ll change persona’s and preferences a zillion times, but for now, she’s into frilly things. Her favorite book is “Fancy Nancy” and favorite movie is “The Little Mermaid.” She always chooses the shiniest, sequinny pink option for clothes, shoes, hair accessories, toys, and books.
She also is bold and brave and kicks ass/takes names. Not only is she not afraid of getting dirty, but she seems to consider it a wasted day if she hasn’t, at some point, jumped hard in a mud puddle and handled something squished into the cement. (Was the thing alive at some point? Yes, I really think it was. Did she throw it down and then just go right back to eating out of her bag of pretzels? Yes, she sure did).
Initially I cringed at the gender dynamics of the pink/blue thing and tried to avoid them both. I thought that I’d hate having a frilly girly girl….BUUUUUT I’ve learned that the fact that we deem “girly” to be a negative adjective is probably our own sexist fault. Because girls are cool, so girl-like things should also be cool. Also it’s been reinforced for me that being strong and also frilly isn’t mutually exclusive.
It’s sort of a relief not to hide from the pink. I love the color pink. Always have. Partially because I’m addicted to the movie ‘Steel Magnolias’ and actually got to play Shelby in a stage production of the show. So I’ve said a few (thousand) times that ‘pink is my signature color.’ (Read it back with a big wig on and in a really thick fake Southern accent and you’ll have a picture of what it was like). 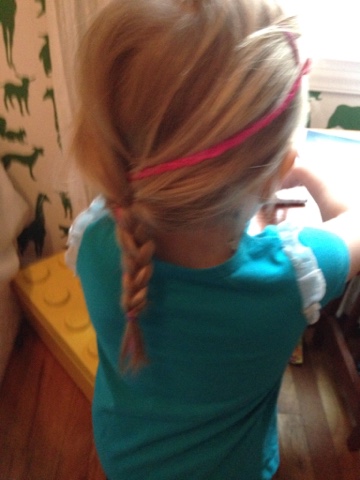 And in medicine, pink is good. Pink is life. Pink is health. Pink tissue has oxygen coming to it and can survive/heal. Also, pink is a color of power and hope. With breast cancer awareness pinkifying the world- it represents solidarity of patients and survivors, and also brings everyone else together to fight against a condition that is (mostly) a women’s issue. That’s cool. No matter what we think of the NFL.
I do think spending tons of time and energy on looking pretty is kind of a waste. If that’s what we mean by ‘girly’ I don’t much dig it. I don’t do a huge amount of primping myself and I won’t encourage Anna doing a lot of it, either. My ideal wish for her (and Henry) would be for her to put her energy out into learning and loving and saving the world.
But if she wants pink sparkly book covers for her Physics books, who am I to stop her?
Maybe I’ll even wear a dress and shave my legs for when I chaperone her high school dance.
(Maybe I won’t even volunteer to chaperone the dance in the first place. That would probably be in her best interest).
We have this children’s book called “Pink is Just a Color, and So is Blue” by Niki Bhatia. It talks about how silly it is to gender sequester a color, and also how both boys and girls can be sensitive, can be tough, can like to play ball, can like to play with dolls, etc. It’s cool.
I bought it for them, but apparently I needed to be reminded, too.
0
Previous Post
Next Post