I’m a Chick and I Really Like Star Wars. Does That Make it a ChickFlick?

By admin on Tuesday, April 12, 2016
I had the opportunity to see two empowerng pieces of art this weekend. They got me thinking. (A terrible past time/I know).
We re-watched ‘Star Wars: The Force Awakens.’ This time, in 3-d (this technologically must be getting better, right? I wanted to hurl none times while viewing) and this time, we watched it with Henry.
I saw it differently, with my 4 year-old sitting next to me. I noticed and was grateful for the fact that the most kick assy-est of all the leads is a girl (‘Rey’, Daisy Ridley). She has super Jedi powers, natural gifts and incredible resourcefulness she’s taught herself. She also has a highly developed sense of empathy and expresses her emotions well. She’s covered in clothes the whole time that are believably functional. She cries when it’s appropriate to feel big feels. She is someone to look up to and admire. Also, Leia is now a General, in charge of the resistance. Bad. Ass.
(We’ve been trying hard to find powerful female voices/characters because Henry keeps saying nail-on-chalkboard stuff like “girl music is pretty, boy music is cool.” So I’m excited for this Rey part).
The male lead (‘Finn’, John Boyega) making the largest change, the most brave, revolutionary move, is an African American….err…I’m told he’s British. Nice American accent. So, anyway, he’s whatever the English version of African American is. 😁
As far as my kids will ever know, it is normal and natural that our heroes are women and people of color. I love that.
The other exciting thing in this film is the friendships. Rey and Finn have a mutual, respectful relationship with no hint (yet?) of romance, which is also refreshing in an adventure film setting. And Finn and a male pilot have a genuinely open, loving male friendship. 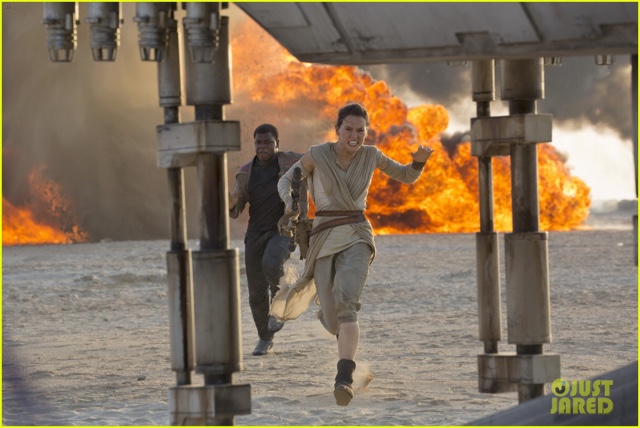 Again, I’m excited for this new normal in film my kids get to see.
And then. AND THEN, my fantastic dad and I went to this very cool new musical called ‘If/Then.’ It got great reviews/Tony nominations while on Broadway, and is now touring. It’s modern and hip and the lead is a female in her late 30’s…..did you hear that? The main subject is female in her late 30’s!! And she’s not a princess or queen or murderess or anything. She’s a PhD city planner who’s recently gone through a divorce.
It’s an ambitious play, simultaneously tracking her life as it diverges in two directions, based on small decisions she makes (answering a phone call/going to a function with one friend vs another, etc). It’s all about how our actions are all consequential….and the waves (“the butterfly effect”) that ripple off from these decisions. It was remarkably well done and complicated, but easy and pleasurable to consume…and it was about a smart and powerful woman who made decisions about and with her male colleagues and love interests but not FOR them….it featured realistic themes of career, ambition, companionship, fertility and unwanted pregnancy, friendship and sense of self. In a non-cheesy way, after it put her (and us) through the emotional ringer, it spoke to not regretting your choices that led you to where you are, but also to not assuming where you are is where you need to stay. Reinvent, reinvigorate, forgive, strengthen, embolden, move on.
It was cool.
So, yeah. If pop culture represents where we are or where we’re aiming to go in society, I’m optimistic today.
I want to be part of it. I want to write cool females into stories and movies and jokes.
The material that is increasingly available in mainstream pop culture, that features strong and real women and people of color inspire me and give me hope for how my children will be taught the world works. It also makes me want to be part of the change. Maybe I should dust off my screenplay about three smart, funny women. Maybe I should finish my novel about two smart, funny women. Maybe I should finish my two-woman comedy show.
There seems to be a pattern here.
Anyway. Art. Rhymes with fart. Women do both. Deal with it, world.
(Robb says I never know how to wrap up my posts. I just can’t disagree more. I think I really nailed this one).
1
Previous Post
Next Post