How to Person Justice, Social and Otherwise Pop Culture

Laughter is to Pain as Aciclovir is to Herpes Simplex Virus: It Doesn’tKill It, But Keeps It at Bay

By admin on Tuesday, May 24, 2016
I just keep re-watching the same shows that I know won’t break my heart. It’s absolutely a protective move, and it’s total weak sauce. I’m watching Rori graduate from college for the 14th time (“Gilmore Girls,” 4eva, no you’re a nerd, no one likes you, be quiet) and missing out on beautiful, insightful, triumphant new art because I am a weenie.
I’ve had ‘Twelve Years a Slave’ out from Netflix for about 6 weeks. That’s, like, a $20 rental, if you’re doing the math at home. I know it’s excellent. i know it’s eye-opening and life-changing and horrible and wonderful and all that. I just can’t bring myself to even watch through laced fingers, since I know the sounds of pain will ring between my ears for too long afterwords.
Why are people so awful. Why. Why do we always fear and use and hurt each other. How can I apologize for what’s been done, make it more right now, help turn mine and the next generation toward empathy and connection and healing? Then it brings up those (<—) questions, and I’m back in that quagmire, wondering about human nature and God and what the point is to any of this, and I’m lost.
I keep turning to comedy because I know it’s safe. We can all laugh together in this shared language of relief and it keeps the feels from burying us. I think comedy has some big healing juju. Especially when it’s exploring the hard stuff, honestly. A common theme from comics doing  standup comedy is mental illness (their own) and addiction (also their own). It’s like a confessional where they’re paying their priest in giggles instead of penance. They get to unload their shit on us, but because they’ve found a magical recipe of words, it’s palatable to us. It’s funny, it’s surprising. It’s relatable.
That’s a big gift, from one to another, on both sides of the mic.
Or, on both sides of the pen? I’m hoping this is a bit of what I’m doing here? We share with each other and give a bit of peace?? Tell me if I’m wrong like Paul Blart: Mall Cop II, OK?
I’m allowing myself to be a little more discerning about what information through media I let in. Because my therapist told me I could, and she is a very, very smart, nice, pretty lady. (It might be time for a refresher of the boundaries speech).
I tend to follow, on FaceBook and through email, organizations that promote human and animal rights and social progress. AND SO, I find that my ‘quick phone check’ at midnight before I fall asleep, will include such gems as “Animal Gas Chambers?” and “My Mom is in Prison, Can you Help?” and so, so much about campus rape and institutional racism and police violence and breathtakingly disheartening politics. And then also, I tend to follow sarcastic, satirical, ridiculous comedy stuff, so I get, like, cats farting into bagpipes as a Prince tribute, or mash-up jokes about the current political climate and Slytherin house.
It’s jarring.
It’s emotionally exhausting to see a friend’s new baby pics and then read about genocide.
That’s life, though, right? I mean, at any time, in any place, there’s huge joy and also unimaginable suffering. But, I don’t know that I have to open all those bags at once, because then I get this upper/downer salad and end up with a confused and broken heart. 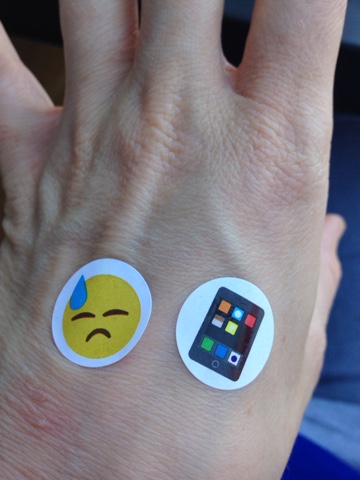 I’m a privileged, wealthy, comfortable, safe, well-fed white person in America. I feel guilt about that, because I didn’t do a whole lot to get that pile of treats. I also feel like there are all these things left undone on the to-do list of the world, and since I’m obviously failing to fix any of them,  the very least I can do is be aware enough to add more, maybe?
But my therapist says I don’t have to solve all the problems, and actually can’t, and definitely will be less anxious and more peaceful if I accept that. (PS- she told me to tell my kids, when they ask, that when I go to my appointments, I’m going to “The Feelings Doctor.” I think that’s 35 kinds of brilliant. She’s so great. Maybe I should go show up at her house with blueberry muffins).
Anyway.
I’m trying. So my first world problem is how I can chill the fuck out about the real, terrible third world problems. Neat.
I don’t want to be blind, I don’t want to be cold, I don’t want to be useless. But I get that I can’t be anything valuable to anyone, including my immediate family of needers, if my heart is in pieces all the time.
Is it totally dumb that I’m just going to try to keep writing? See if maybe my comedy and/or whatever else this is that I do might make someone a little less miserable? Humaning is hard. Can I help anyone make it less hard by sitting on my ass on the back porch in my bathrobe in front of my Ipad like some sort of hillbilly done won the lottery?
We’ll see, I guess.
Ernest Hemingway said: “Write hard and clear about what hurts.”  I can’t stop thinking about this quote.
I want to. I’m going to keep practicing. Thanks for being my people who read my attempts.
0
Previous Post
Next Post