How to Person Justice, Social and Otherwise 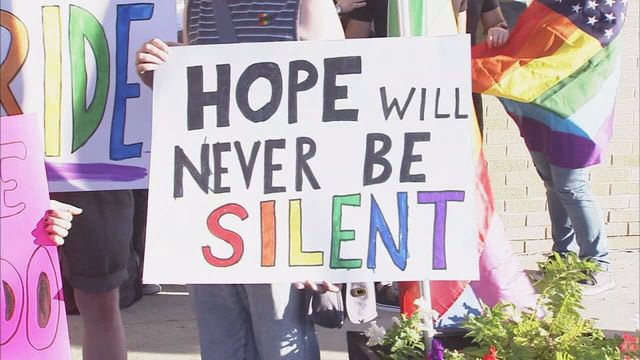 When I drove up to the vigil, there were a lot of police. I was afraid they were there to prevent the gathering, to power over the people feeling raw and powerless. They weren’t. They were there to defend the mourners from attacks that didn’t come.
A whole world is reeling after a man gunned down 50 people in a nightclub in Orlando, FL this week. A gay night club. Investigations are ongoing, but it seems he was there because he was fighting for some religious conviction or personal one that determined LGBT people deserved to be dead.
I just fell silent because I can’t find the words. Words, words, words. They’re so meaningless and stupid. I don’t have the energy to even feel anger. I want to, but my lungs won’t expand fully enough to shout. I just feel crumpled.
My therapist says we’re getting used to these killings and becoming numb to them. That might be true. I feel empty and sick and wordless.  As we grapple to salvage some sort of understanding after this happens, many people’s words come fast and loud and focus on the weapon used to destroy lives, on policies that might decrease access to that weapon, on who’s an American, who’s an outsider. How religion and governmental policies that support religious discrimination feeds this kind of hate. Yeah. Yeah. It might be all that. It might be. I don’t know. I just don’t know anything, I can only see through sad, slow tears. I don’t know.
We turn to our deities, right? In time of confusion and grief. We turn to the beings that we think are the essence of love, when we’re confronting hate. But….but….the organizations/businesses that are founded on these deities have dropped the LGBT community into the mud and only now come out with prayers and enthusiastic rainbow colored remorse.
I’m guilty by association.
The discrimination against LGBT folks in the US is staggering-  jobs, housing, personal freedoms, healthcare, financial security, their homelessness and suicide rates, the list is endless. Even the right to donate blood to their fallen brethren is limited. They’re marginalized, mistrusted, judged. We as a society have pushed them down and away.
Despite this, in my understanding, the LGBTQ community is a powerful force, and tight, close-knit society of people. And, in my experience, so, so loving. So open. They’re literally fighting for love. I always feel a little twinge of ‘do I really belong here?’ when I take my straight self and my family to Pride fest and other functions, this vigil tonight….and I always get nothing but welcomed and embraced and encouraged. And I know this isn’t about me, but out dancing with girlfriends, where’s the place we’ll have the most fun and the least be disrespected or assaulted? A gay night club, obviously. It’s a safe haven full of men who don’t want to abuse me.
It’s not about me. No one snears or threatens when I hold my husband’s hand when we’re walking down the street. We can kiss in a movie theater and not hear a word of contempt. I’ve never been told my love is an abomination. I can’t put myself in their shoes. My heart breaks but it doesn’t totally understand.
So. What do we do? I think we listen. We let the people who do know this hurt, this injustice tell us what our next move should be. How can we change attitude and policy? Lead us.
I’m so disappointed in us. This was one person with a gun, possibly a crazy person, but more likely just acting on a crazy hateful belief. A belief that has been encouraged.  We do everything we can in this country to make it hard to be LGBT. We don’t support them, we don’t defend them. It’s a triumph that the Supreme Court decided on behalf of gay marriage this past year, but also an embarrassment that it took this long, and there a million other outdated policies still keeping them shut out from protections and freedoms the rest of us take for granted.
This is a shocking violent crime but an unfortunately familiar, unshocking anti-LGBT state of mind. We need to fix that. We knew it was there, now it’s bloody well there, in too many coffins in Florida. If it’s hate reform or gun reform that will reduce these mass murders, gun control reform will be faster, I think, but will it solve all of this? Fear and hate is what we need to dig out from the roots.
How? I don’t think silence is the answer, but where do we direct our words so they have meaning and impact? If you have any idea, please let me know.
0
Previous Post
Next Post