By admin on Wednesday, July 20, 2016
‘MOMMY, YOU’RE BEAUTIFUL….AND SMART.’
This came from Anna tonight. It was incredibly sweet and cool. Blew me away. Minded my boggle. She may have been flopping around the bed trying to avoid sleep, grasping for compliment straws, but still.
I’ve never known how much to talk about her appearance. Some influences tell me that I shouldn’t at all, but on the other hand, I want her to know that I think she is beautiful because she’s going to be trying to figure out where she stacks, and I want my positive vote cast in the mix…also, it can’t be avoided that she recognized that physical appeal has value. She notices characters in movies who are ‘BEAUTIFUL’ and has already realized it’s a positive, enviable thing. But I always trip over every physical compliment with “…and smart, and funny, and cool and goofy and heroic and compassionate…” People in the grocery store who say, “oh, isn’t she pretty” often get, “and smart, too!” from me as I bolt away before they touch her shiny, shiny hair with their stranger fingers.
Apparently she’s picked up on my methods.
But, so, the real big news here is that she’s going to have grown up knowing that it’s GREAT for girls to be smart, that her mom was smart, that she’s smart. That it’s expected. I think even as recently as…right now…girls are led to believe that being smart isn’t a priority? Or isn’t cool? Isn’t achievable? Be charming, be coy, be pretty, be sexy, be exotic, be erotic, be cute, be fun, be beautiful…but smart? Meh.
I would argue that “funny” is another prize quality that isn’t often awarded to girls/women. In the bowels of history, and as recently as…right now, people have furiously wailed that women shouldn’t be allowed to be funny.
(Side note, they aren’t called “women,” they’re called “girls.” Do you ever notice that? Listen for it. Just the other day, in the comedy, “50 First Dates,” I noticed that Adam Sandler’s character said, “You’re the girl of my dreams…and it seems like I’m the man of yours.” It’s not as creepy as it sounds, it’s not a Woody Allen thing, these two adults are the same age, it’s just that that’s how our language situates men and women in hierarchy. Come on now).
Anyway. Right. So, the 30-50 year old “girls” starring in the new Ghostbusters (2016) movie right now (Kristen Wiig, Leslie Jones, Melissa McCarthy, Kate McKinnon) have caused quite a stir because they made a sequel in a comedy series about ghosts and this time, the 4 people who made up the sciency ghost busting team were female instead of male. The whole country shit its collective pants. (These are really big pants, bigger every year since we have a nation-wide obesity problem and there’s just so much shit).
So, here’s my reaction, after seeing Ghostbusters (2016):
1. These are the best comic actors in the business, so it’s with ALL due respect that they would be cast in a reboot/sequel of a well-respected comedy franchise. I don’t see why having female instead of male leads has to be making a point or challenging anyone’s affinity for the first two movies? Surprisingly, these ghost chasing scientist goofballs acted like…ghost chasing scientist goofballs….no matter what genitalia lies beneath the jumpsuits. Slimer was not subdued by breast milk or anything, OK?
2.All the people who are like “who’s this genius, Kate McKinnon? She’s a marvel! Where did she come from?” are stupid for not having been watching SNL all these years, since she’s been a genius marvel on there since 20-damn-12 and it’s your own dumb fault for not watching SNL. There, I said it. It had to be said.
3. The original movies are so great because it combines big, broad, wacky, sometimes startling set pieces and CGI stuff, with quiet, genuinely excellent writing- great dialogue from well developed characters in believable relationships with each other, delivered by stellar actors. So…they did all that again. It had the same feel EXACTLY as the originals down to the camera making sweet, sweet love with New York City. The leads all made the funny asides and observations believable and humorous, and also rocked the shit out of the action shots.
4. I had the biggest, goofiest grin on my face the whole movie because, well, because I love Ghostbusters movie and this is another great one. And also because it was funny women being fantastic in a movie that they were told they shouldn’t make because women shouldn’t be allowed to be funny. And mostly because it meant I’m allowed to be funny. I should be cracking jokes and writing stories about funny, brilliant women. People do want to read/watch them. Oh, Lordie, that’s a big deal. I want this for me, I want this for my daughter.
5. Don’t read the internet. It’s so, so dumb and mean. Watch this movie instead! 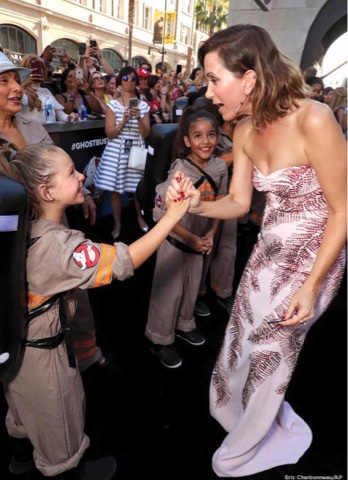 Kristen Wiig, being a hero to this generation of Ghostbusters.

Having heroes who look like you matters. In books, movies, TV, there’s impact in how you think people like you are portrayed in these media. This is why there’s so much need to diversify parts for race and sex in TV and movies, right?

I want my daughter to see funny, smart, heroic people like her. This year we have not one but TWO kickass female leads in the addition to the Star Wars film franchise, and now, FOUR BAMF females in the new addition to Ghostbusters. Anna will grow up with these movies as standard. These women, who are powerful, brilliant and funny, whose friendships are tight as they empower each other, whose functions and successes in these films have nothing to do with men, who are good employers and leaders and innovators who stand up for what they believe in…and who go ahead and save Manhattan….these will be her action stars, her comedians, her heroes. Women like her.
Pretty cool. 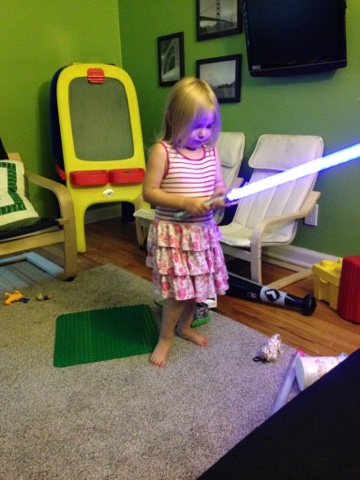