Kindergarten is Kicking Our Ass. 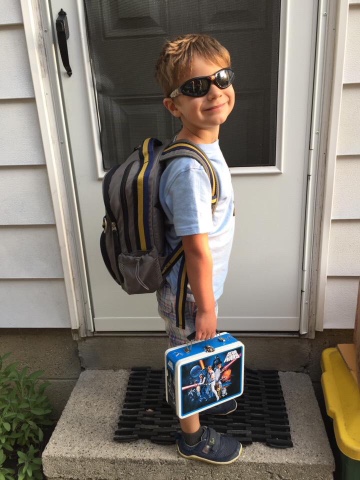 Now that bootcamp has started, there’s no real naps during the day. I’m told that after lunch the lights go off and soothing sounds emit from a music machine, and that some kids rest their weary little heads on their desks, but it sounds like mine is not one of them. He sounds like he’s in judgement of the ones who snooze, like maybe they’ve all decided this is the gang initiation and sleeping is a sign of weakness. I hope they don’t draw dirty pictures on the sleeping kids’ faces or dip their hands in warm water. They’re not that far out of potty training, it’s a risk.
Anyway, not napping is a change for Henry, who still napped most days of the week before military school started. He’s not sleeping well at night. He doesn’t seem stressed out during the day, but at night he keeps having bad dreams (about a monster with pink face and pink hands) and waking up upset and disoriented. I’m hoping it’s just exhaustion and he’ll adjust and get back to peaceful sleeping. (Also, that monster sounds like it could be his sister. If it happens again, I’ll confirm her whereabouts in her own bed.)
He’s already making a few friends, which is lovely. Except that they’re all little disgusting heathens, so they influence each other to do and say ridiculous, “naughty” things. We had to fill out a little survey for his teacher about what he’s like, including naming 3 adjectives that describe him. We’re suckers who are totally woo’d by him, so we wrote, “Henry is gentle, kind, and curious.” When I told him what we said and asked him to name 3 adjectives that described himself, he said, TOOT, FART, AND TANUS. I’m pretty sure he meant “anus” and that that’s another new vocab word he learned from a charming new friend. I started to correct him and to described the GI tract with its terminal destination, but decided I was probably just giving him more fodder. Because we’ve always taught them exactly what their parts are all about, he’s already likely going to be the kid from whom all the other kids learn about genitalia and baby-making…so maybe I’ll just play dumb about the poop shoot for now, so the other parents can’t blame me for everything.
He has said once or twice I DON’T WANT TO GO TO SCHOOL TODAY. I WANT TO SKIP AND STAY HOME. I tried telling him about how exciting it is that he’s learning to read! Once he can read by himself, when he has a questions, he can look it up in a book!…or encycloped…er…internet! I said, “You can find out yourself if you’re wondering how many teeth a T. Rex has or the wingspan of a Pterodactyl!”
He said, I ALREADY KNOW ALL THAT.
I see.
Also, when he shows any resistance to anything, I’m always suspicious of all things always, so I ask him, “why don’t you want to go to school? Is someone hurting you or making you feel uncomfortable? Is there someone with a pink face and hands who is scaring you??” He’s like, NO. MOM. GOD. I JUST DON’T WANT TO GO BECAUSE I WANT TO STAY IN BED AND PLAY VIDEO GAMES ALL DAY. “Oh, right. Well in that case, get your tiny tanus out of bed and go to school.”
Week 2 near complete. Only, like 518 more weeks of school to go before he graduates high school. We can do it. It’s fine.
0
Previous Post
Next Post