Is It Really So Great to Be Grown?

By admin on Saturday, October 1, 2016
Kids are forever being rewarded for being “SOOOOO big.”
When we say, be “big” we really mean “grown.” We want them to act mature, responsible, respectful, quiet, to make good choices, take risks that pay off, to do things independently. You get dressed by yourself? You’re such a big boy! You crapped in your pants again? That’s not what a big girl does. It goes like that.
We think that being “big” is the highest praise we can give children, because we foolishly believe growing up is their goal for themselves and not just ours for them. Youth is a slow, inevitable ascent toward adulthood, but hastening kids toward adult-type behavior is mostly for our own convenience. They should hurry up and learn social norms, we think. Fall in line, because it’s annoying for us to have to keep leaving line to go get them.
But what’s so great about being an adult, anyway?
Kids are curious and not self-conscious when they don’t know stuff and have to learn. Kids see all people as potential playmates or buzzkills based on how the people treat them, not how the people look. They don’t understand that we’ve stratified society based on arbitrary human characteristics.  Kids are honest and straightforward. They believe in big, grand, cool, exciting things like miracles and magic. Each day is a chance to learn more stuff instead of a burden to get through the day’s chores.
Adults who have child-like characteristics- aren’t cynical enough, don’t speak primarily in sarcasm and hostile humor, who take people at face value or are *too* enthusiastic, are suspected of being mentally ill or cognitively delayed or naive. To be fully “grown” you have to assume things are terrible, it seems. You have to look for things that differ from your expectations and scrutinize them, hate them. You have to practice being nonplussed in the mirror, because if you’re plussed too much, people will think you’re weak. I envy my kids because they don’t know yet that they’re supposed to face each new situation suspiciously. They just take it all in and try to figure out what part of it might be a snack.
I’ve been thinking about the whole internet troll thing lately and reading and listening to conversations, both in my head and out in the world, and realize we’re all trolling all the time because we’ve trained our knee-jerk reaction to be skeptical and negative. A new song, a new show, a new proposition, a new person. We look for flaws first. How might this thing hurt me or make me feel small or not be what I expected?
I think we’re trying to protect ourselves from being hurt, disappointed or being taken advantage of. We’re protecting our most precious pink part- our ego. You can’t get into adulthood without having been knocked around some (or a lot, for many people), so we try to avoid all things with the potentially bad results, and end up avoiding all things. If the most desirable thing a kid can be is an adult, than the biggest criticism you can give an adult is they’re immature, but I don’t agree. I think being child-like is wonderful and should be more emulated.
Adults are tripping over their ego all the time. Kids aren’t. Adults deal in insecurity and fear of failure, struggle for power, desire to be loved but not willing to say it out loud, stuff like that. It’s a real bummer. We can’t just lie down on the ground and admit that we feel left out and lonely, instead we lock up, act vicious, act arrogant and mean.
Plus, grownups do some really weird, actively lame things that kids would never do:
-Eat chicken (that’s not fried, obviously)
-Have hairs waxed/plucked off their bodies on purpose
-Celebrate drinking as if they invented it
-Wear ties
-Be obsessed with sex, but unable to talk about the penis or vagina (kids are great at this latter bit, mine do it all. the. time.)
-Spend all this time making their bodies thinner and more “perfect” but not getting any better at being a ninja or better able to outrun their friends or a dragon
-Caring about famous people they’ll never meet but not caring about next door neighbors
-Being quiet all the time and trying to seem as small as possible, unless they’re drinking
Actually, maybe we drink to let ourselves temporarily feel more child-like. Things slow down a bit, our expectations for ourselves are lower, we can be sillier and less perfect, more honest. Maybe drinking feels like freedom because we can throw off our self-conscious tethers for a while and just…be. It’s a relief.
Everything is complicated when your’e an adult. Even the word “big” can’t really be used to mean you’re successfully grown. It implies an elevated BMI or maybe bulky muscles or too much breast. There will come a time when my daughter will be discouraged to be too big, too muscular, too fast, too tall, too loud and too seen. If she follows the rules enough, she’ll be expected to stay “toned” but not obviously strong, because being strong is an unattractive (threatening?) trait in women. She’ll be expected to wear clothes and shoes that will make running fastest impossible. 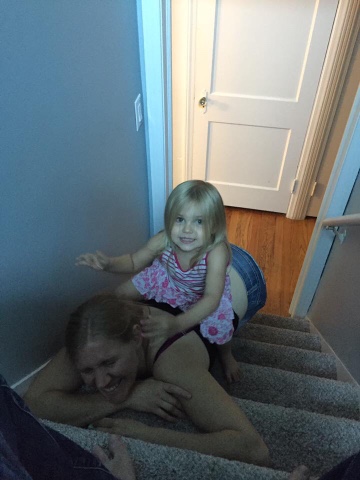 This picture of me initially struck me as “my shoulders are too broad, it’s not feminine enough.” I’m a large lady and I schlep around 30-50 lb children every day and do a very physical job that requires strength, why WOULDN’T and SHOULDN’T my shoulders be big? I hate that my first reaction was shame. Blerg. I don’t want that for my kids.  (She was also riding me at the time, calling me a “cow.” I’m choosing not to take it literally/personally, although in her short life so far, that’s a fair assessement of my position on earth).
So, anyway, I hesitate to push my kids to be “big” too much, too soon. They need to follow directions and rules and be respectful and polite, but I want them big-eyed and excited as long as possible. Ideally, always.
So, as the kids grow up, I’m trying to grow back down a bit. I’ll encourage them to mature as they should, but if I can save them from hardening so much they crack, I will. And I’m going to try to go a month not being snarky or negative. I’m assuming it will feel like constipation and my eyeballs will eject from their sockets from the strain of not rolling them…but I’m gonna try. I can’t turn off all the trolls, but I can subdue my own and see what happens.
I’ll keep you posted.
0
Previous Post
Next Post