As I See Myself Better, I’m Trying to Keep My Back to the Mirror

By admin on Monday, February 20, 2017
“It doesn’t happen all at once.
You become.
It takes a long time.
That’s why it doesn’t often happen
to people who break easily,
or have sharp edges,
or who have to be carefully kept.
Generally, by the time you are Real,
most of your hair has been loved off,
and your eyes drop out
and you get loose in the joints
and very shabby.
But those things don’t matter at all,
because once you are Real, you can’t be ugly,
except to people who don’t understand.”
-The Velveteen Rabbit, by Margery Williams

The other day, Anna told me that my eyebrows were “boys” eyebrows. Today, Henry told me my nose was really long and maybe, if I’m lucky, I could turn into an elephant when I grow up.

Last week, I went out with some new friends for Galentine’s Day and a 20-something told me I had “great skin for 36.”

Aging, and physical appearance in general, is a tricky, loaded thing. We have this one body our whole life, and, from an early age, we have concerns about it and goals for it. I don’t mean cholesterol points and bone integrity goals, I mean goals about how thin, how young, how flawless, how same as everyone else, we’re supposed to be. It’s much discussed how inundated we are with images of the agreed-upon physical beauty standards and how advertisements are so influential to how we feel about ourselves and how we spend our stress/money/time/self esteem. And generally the older the body gets, the harder it is to stay ahead of those concerns and to meet the goals.

BUT, the magic in aging is you get wise. You stop letting those marketers selling shiny thigh gaps tell you that it has to be one of your concerns. You’ve seen some stuff, you’ve survived some stuff, your goals have changed. You know your face and legs and boobs and brows is about the least interesting thing about you.You are your stories, your strength, your courage, your love, your faith, your energy, your humor, your fortitude. The rest of it is just fluffy static. I think if we’re doing the aging thing right, the body concerns have less impact and the goals relax because we’re focused on bigger heart/brain stuff for ourselves. We’re trying to be brave and real, good and purposeful.

So, my body is not whatever they tell me perfect should be but I’m great with it. There’s freedom in critically assessing the expectations sold to us and calling out their harmful bullshit. I’m getting better at it. It takes a lot of work and time. I still play by more rules than I wish I did. It’s a process.

About my eyebrows, I told Anna, “I have thick hair there because that’s how it grows because I’m a mammal.” Dude, we ALL have ‘boy eyebrows,’ just some of us dig them to by the root and some of us largely let them be. I thought, you’ll be sorely disappointed to find out where else mammals grow ‘boy’ fur, honey bunch.

About my elephant trunk for a nose…I told him I like it because it does a good job smelling, and it’s like my grandma’s and my dad’s and it makes me think of my family. It’s characteristically ours. My nose used to be one of my top concerns. It used to bother me so much. It was the most prominent thing I got teased about in youth, next only to my ridiculous height (girls are supposed to be short and slow and weak, haven’t you heard?). Now I truly could care less. Now, if you’re going to make fun of me, let it be about my content, or it’s not going to hurt me. If you hate my jokes or you think I’m a jerk, I’m listening, but if you’re bothered by my face or my body, that’s on you, not me anymore. AND YET STILL, if I do eventually become an elephant when I grow up, my first order of business is to step on Henry.

The twenty-something who was trying to throw me some pity about my oldness asked me what my secret to looking young was, and I told her coconut oil…but then a few minutes later she went outside to smoke a cigarette and when she got back I got to share with her another super secret anti-aging beauty trick I have. (Ahem.) I was (almost) not even judgmental because I am so evolved. You’re welcome.

What else? I have a deep worry line in my forehead. It’s mine, I earned it. I’m keeping it. I exercise to stay healthy and strong and so I can outrun predators and because I yell at my kids less when I do.

Overall, I’m happy with how I look but more importantly, I care less and less.

Guess what? I’m almost 40. Bam. So many perks. Suck it, youngins, less chocolate for you. 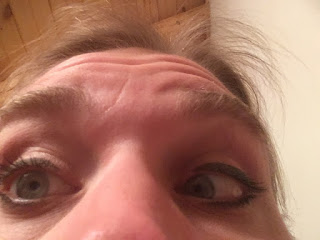